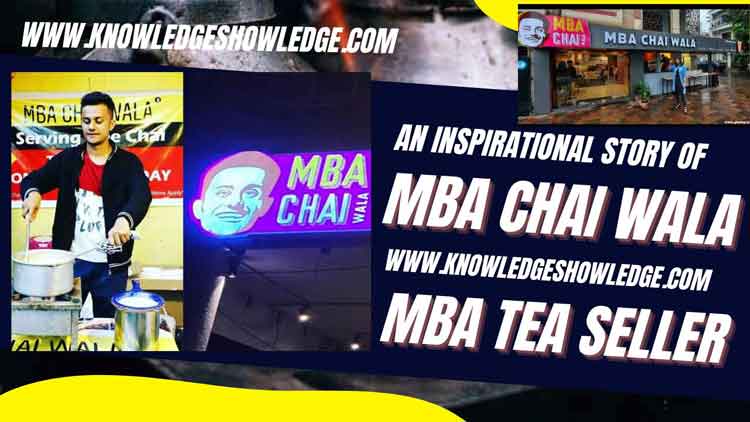 What happens when a Young MBA Guy Drops Out College to Become a Chai Wala? An Inspirational Real Story of a Young Ahmedabad Entrepreneur.

Today we will talk about the second most famous tea person of the country after Shri Narendra Modi, ‘Praful Billore’, who is also known by the name MBA Chai Wala.

2014 is the year you probably remember for the Lok Sabha elections and the change of power.

But this year you had started your journey in India’s Future Millionaire Ahmedabad. From wanting to get admission in MBA, to making MBA chai wala a brand, from being teased as a chai wala to becoming an inspiration to millions of youth, Praful Billore’s life is a complete story in you, of dreams, of struggles and more.

Also Read: The Best Inspirational Movies of All Times

A simple boy named ‘Prafulla’ was busy preparing for MBA Entrance Exam with simple dreams. Like every graduate boy, Prafulla’s dream was also to get admission in a big MBA college and get a decent salary and a normal lifestyle. But destiny had something else in mind. So that was just the beginning of Praful Billore’s story of becoming an MBA chaiwala. MBA chai wala story

In those days Prafulla would have indulged in studies for 8-10 hours a day, if he had been with only Math’s, Reasoning, English, Question Answers and a cup of tea, which was all he had, neither friends nor family and all this was Prafulla’s.

Three consecutive years of hard work and two failed attempts, with this thousands of cups of tea. Now Praful was completely broken. Three years of hard work and Prafulla did not reach any point. At that time Prafulla closed the door of your room and slept the whole day and night. Similarly the next two weeks passed. Prafulla had no idea what he would do next in life.

When you try to achieve something for three consecutive years and you don’t get it then you feel as if nothing is left and all happy is over but it is not the end of life that’s the time To know and think about what we can do next.

At that time Praful also did the same thing Prafulla told you father that now he would never touch books in life and Prafulla set out on a journey in search of himself. There was rest in the city which was Ahmedabad. Now Prafulla’s mind asked Prafulla the question that for how long will he roam like this, after all whether there is anything to do in life or not?

From studying CAT to making Burger, Prafulla continued to work like this, but one day Prafulla asked himself the question that how long he will live such an unrecognized life. People were giving orders for Burger by giving voice to Praful, but Praful did not have any identity of his own. Now Prafulla knew that he had to make his own identity.

Also Read: The Story of Turtle and Rabbit – A Management Lesson

Initially, Prafulla thought of opening his own Burger stall, but Prafulla was looking for something that would connect the whole country, which could happen every morning, afternoon and evening, and there was only one such thing, that is tea.

At the time when Prafulla thought of opening a tea shop, there was a pot shop in front of Prafulla, but still it took 45 days for Praful to muster up the courage to buy tea. Now the time had come that Prafulla, you opened the tea stall, but from where will the money come? This question persisted. Prafulla told a lie to your father that he needs Rs 15000 to do an international course and with this money, Prafulla opened his first tea stall.

No customer came to Prafulla on the first day. Prafulla knew that no one would help him unless he helped himself. Prafulla himself used to take his tea to the people and say “Hi I’ve started My Chai Ki Dukaan, Would You Like To Taste It” People would wonder who the English speaking chai guy is. On the second day Prafulla earned Rs 150. People knew that this chai wala is no ordinary chai wala.

Similarly, Prafulla’s business started doing 1200, 4000, and 5000. At the same time, Prafulla got a call from your father, he asked that son, you were about to do MBA, what happened to him? To fulfill your father’s wish, Prafulla took admission in a local MBA college. But Prafulla did not feel like in that college, at this time Prafulla thought that why did you run the tea shop for the whole day, Prafulla said to himself “NO MBA only Chai” and with this thought Prafulla did the same on the seventh day of college.

But Prafulla was unaware of the next challenges in his life. People started burning from Prafulla’s shop and he and she forcibly removed Prafulla’s shop. Prafulla’s tea business was closed in just two months. Now this time Prafulla has put the tea cart in such a way that no one can remove it. Prafulla talked to a doctor and you parked in front of his hospital, instead of this Prafulla used to give 10000 rupees a month to that doctor.

Prafulla started social service from his shop. Prafulla put a board on you shop and wrote on it that if someone wants a job, then he should write his name or yes, when someone needed an employee, he would contact on the number written on that board. Similarly, many people got jobs because of Praful’s shop and some people got married too.

Till now Prafulla had not given any name of his shop. The demand of all the customers of Praful was that some name of the shop should be kept. At the same time Prafulla named his shop which was called MBA Chai Wala in short. Similarly, a brand MBA Chai Wala started in the same way that the business started from 15000 has become 3 crores today.

With this struggle, Prafulla proved that man does not need to be inspired by anyone. He can be the creator of his own story.