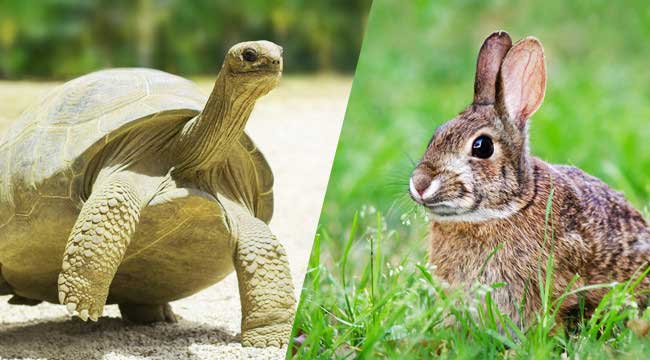 The Story of Turtles and Rabbits – A Motivational and Inspirational Management Lesson!

Once the rabbit got proud of his fast move and he used to challenge whatever he could find to race.

The race took place. The rabbit ran fast and looked back when he went far ahead, the tortoise was nowhere to be seen, he thought to himself it would take a long time for the tortoise to get here, let’s rest for a while, Lay down It is not known when his eye got infected while lying down.

The tortoise walked slowly but steadily. The tortoise was about to reach the finishing line when the rabbit’s eye opened a long time later. The rabbit ran fast, but by then it was too late and the turtle won the race.

Moral of the Story: Slow and steady wins the race. The slow and consistent race wins.

We all know this story, now let’s see the next story…

After losing the race, the rabbit gets frustrated, he reflects on his defeat and realizes that he lost the race because he was over-confident… he should have reached his destination and stopped.

The next day he challenges the turtle to race again. The tortoise is full of confidence after winning the first race and agrees immediately.

The race takes place, this time the rabbit runs to the end without stopping, and beats the turtle by a very large margin.

That is, it is good to be slow and steady but it is even better to be fast and consistent.

For example, if there are these two types of people in an office, then they move faster which are also fast and consistent in their field.

The story is yet to come my friend…

This time the tortoise thinks something and he understands that the way the race is going on now, he can never win it.

He once again challenges the rabbit for a new race, but this time he asks to keep the route of the race to his liking. The rabbit gets ready.

The race begins. The rabbit rushes to a fixed place, but a fast flowing river is flowing in that path, the poor rabbit has to stop there. The tortoise walks slowly to get there, crosses the river comfortably and reaches the target and wins the race.

For Ex: If you are a good speaker, then you should go ahead and take the opportunity to speak in public. By doing this you can grow your organization faster.

The story is still left my friend…

After racing so much, now the tortoise and the rabbit became good friends and began to understand each other’s strengths and weaknesses. The two together thought that if we support each other then any race can be won easily.

So the two decided to run the last race together once again, but this time decided not to work as a competitor but as a team.

Both stood on the starting line get. Get set go. And immediately the rabbit picked up the turtle and started running fast. The two soon reached the river bank. Now it was the turtle’s turn, the turtle sat the rabbit on its back and the two crossed the river comfortably. Now once again the rabbit had to pick up the turtle and run towards the finishing line and together they completed the race in record time. Both were very happy and satisfied, they had never been so happy winning a race before today.

Individually, no matter how great a performer you are, you cannot win every match on your own.

Here is one more thing to note. Both the rabbit and the tortoise did not sit down frustrated after their defeat, but they tried to understand the situation and prepare themselves for the new challenge. While the rabbit worked harder after his defeat, the turtle changed its strategy to turn its defeat into victory.

Whenever you fail, either work harder or change your strategy or do both, but never get frustrated by accepting defeat as the last victory can be achieved even after the biggest defeat!

If you have any questions related to the Story Turtles and Rabbits (A Motivational and Inspirational Management Lesson) then write in the comments section or you can also email us. I wish you and your family a happy and prosperous life.

The Story of Turtles and Rabbits – A Motivational and Inspirational Management Lesson! – A Divine Hindu Religion Spiritual Blog on Hinduism