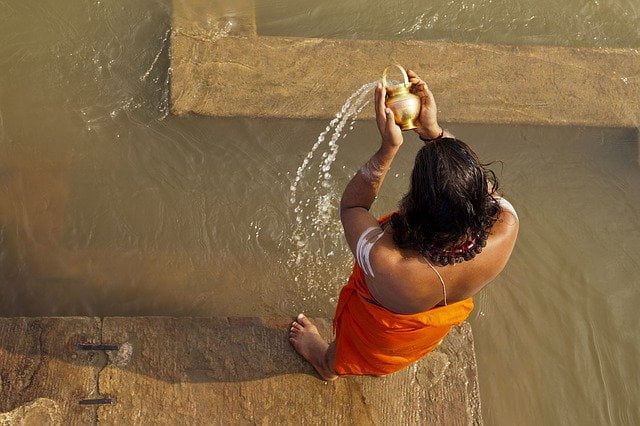 The meaning of the word Snan Vigyan / Science of Bath (स्नानविज्ञान) is purity which is sweat in our body. Its aqueous part evaporates and flies away. And what is left becomes scum and settles. If it is not washed after bathing daily, then a layer of mail will get deposited in the body, due to which the pores of the hair follicles will be closed. This will happen that the internal sewage and contaminated air will not be able to come out, due to which bad odor and many diseases will arise from the body.

It also becomes clear from this that bathing means taking a bath, it should be done in such a way that the dirt is removed properly, for this it is not enough to add 2-4 lots of water quickly, while rubbing the body with enough water and rubbing it. Should be washed with water.

In the Hindu scriptures, it is considered better to bathe in rivers with holy water like a pond than a planet, a river instead of a pond and a river like the Ganges, bathing at a well is considered a medium and done at home. Bath is considered the lowest.

Right Way to Take Bath in Science of Bath

First of all, water should be poured on the head, because of this the heat of the head comes out from the feet. On the contrary, if we pour water first in the feet, then the heat of the feet etc. reaches the brain and causes harm. This is the reason that after reaching the water bodies like Ganga (Spiritual Ganga) etc., first of all, there is a law to bow down by pouring water on the head. By doing this, according to the science of Adhidaivik, the Hindu Goddess like Varuna and Ganga etc. is also respected.

One should take a bath facing the river from where it is flowing. The speech becomes cheerful as soon as it touches the water while taking a bath. It should be used properly in the recitation of Lord’s name, Kirtan Stotra, Mantra , etc.

Meaning of Bath in Brahm Muhurat as per Science of Bath

Benefits of Bath During Brahm Muhurt

Taking a bath in the Brahma Muhurta has a direct effect on the human mind. His physical mental state is strengthened and the rites of cleanliness, purity and purity are included in it. And after doing bath etc., these divine waves are attracted towards human beings.

Avoid These While Taking Bath

Taking a bath in the night from 10:00 am to 3:00 pm causes physical harm, after taking food, in case of indigestion. Taking a bath wearing more clothes hinders the body’s manhood. Taking a bath without clothes is not good, because of this, the God of water (Hindu God) is disrespected. Due to all these reasons, taking bath in this way is said to be forbidden in the scriptures.