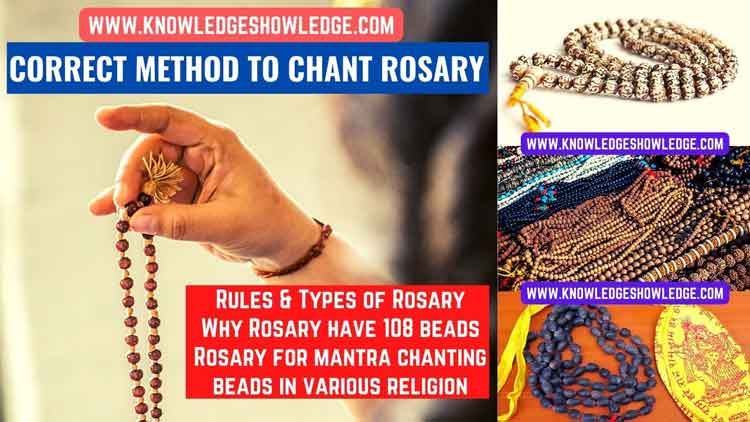 The Correct Method to Chant Rosary

The Sumeru of the rosary is not crossed at the time of chanting. Start chanting from Sumeru and after reaching Sumeru again, turn the mala. The beads are always slid towards the palm.

The general tradition is that the rosary is held in the right hand near the heart during chanting. In this case you can combine the chanting with the heartbeat. Chanting in this position gives a deep feeling of the mantra. I place my left hand on my thighs in such a way that the open palm remains towards the ceiling. This allows you to hold the bottom of the wreath, so it doesn’t get tangled. You can also place the right hand with the rosary on the right knee if you wish. In this position the rosary remains on the ground.

The necklace consists of small beads or beads separated from each other by a brahma-knot. The beads of the garland are woven into the thread of yarn. They are usually numbered Rosaries of 54 and 27 donations are also widely used.

Each wreath has an extra bead, which is separated from the other beads and remains threaded at the join of both ends of the thread. This is called Sumeru. The purpose of Sumeru in the middle of the rosary is to remind the chanter that he has completed 108 repetitions of the mantra while chanting the rosary. Mala has been considered essential in various styles of chanting. He is a powerful means of keeping the seeker’s consciousness fixed on chanting.

The beads of the garland are usually made of basil, sandalwood, rudraksha or crystal. Basil garlands are widely used in chanting, as the basil plant is considered very sacred. It has spiritual and healing properties. Tulsi has a sedative effect on our mind and a great purifying effect on our emotions. Worshipers of Vishnu often use Tulsi mala, as Tulsi is considered to be an incarnation of Vishnu’s beloved wife Lakshmi.

The garland of sandalwood has a damp fragrance, it has soothing and protective vibrations. Its effect is cooling and sandalwood rosary is beneficial for persons suffering from various skin diseases. Rudraksha is the kernel of a wild fruit. Rudraksha garland is very effective in chanting and meditation and is worn by the worshipers of Shiva. The magnetic properties of Rudraksha affect blood flow and give strength to the heart. Therefore, patients with high blood pressure wear garlands of Rudraksha. Crystal beads have powerful spiritual properties. Worshipers of the goddess use it.

Use of Beads in Various Religions

Not only do practitioners of mantra and yoga use beads but also supporters of the Mahayana branch of Buddhism use beads extensively for chanting. In addition to the 108 beads, his necklace consists of three more beads which symbolize the three great phrases “I take shelter in the Buddha”, “I take shelter in the Dhamma” and “I take shelter in the Sangha”. Roman Catholics use a bead of 54 beads. In Greece and the Balkans, where the Grok Orthodox Church is influential, everyone carries the Rosary with them wherever they go and chant it as soon as they have time. Her costume is considered incomplete without the garland.

Why Is A Rosary Necessary For Chanting Mantras?

Many people do not understand why beads are used for chanting. Even if they have to use the rosary, they give it very little importance. Therefore, the importance of the garland should be understood. It is the nature of the mind that it cannot be still for a minute, so the need is felt for some medium to let us know when we are conscious and when our mind begins to wander. In chanting, this is the medium of knowing, the rosary. This tells us when we strayed from the goal, and when we stayed aware of it. The rosary also shows how many repetitions of the mantra we have completed.

The seeker starts the practice of chanting from Sumeru and rhythmically slides one bead with each repetition of the mantra until he reaches Sumeru again.

In a state of chanting, when the mind becomes calm and steady, the fingers stop working. For a moment she becomes motionless and the seeker becomes unconscious. Sometimes the garland falls from his hand. When such a state occurs, the seeker should understand that he has strayed from the goal of his chanting or has lost awareness. If you do not use rosary beads in chanting, how will you know what you are experiencing?

The rosary itself signifies the continuity of chanting and informs you of the changing forms of your consciousness. If you slide the rosary beads with the mantra, it is an indication that you are consciously chanting. When the mind begins to concentrate with the chanting, the mala automatically slides smoothly. It is not necessary that your mind and intellect accept the necessity of the rosary for chanting, but it must be accepted that the rosary is a very useful means for chanting successfully and for keeping the mind engaged in it.

Why Do The Rosary Only Have 108 Beads?

It is also necessary to understand why there are only 108 beads in the necklace. It is explained in many ways in the scriptures. Here we will try to understand it by taking a couple of examples from the scriptures themselves. “1” symbolizes the highest consciousness, “0” symbolizes the universe or so to speak, the entire creation, and “8” the eight forms of nature – the earth, water, fire, air and sky elements and the mind, intellect and ego. Some scholars consider the 108 beads of the necklace to symbolize the necklace of 108 Narmunds worn by Kali. The 108 beaded persons are also considered to symbolize the 108 births of consciousness, because after so many births the person attains self-realization.

Similarly, various arguments are made about the 27, 54, and 1001 beads, but in fact these numbers have great significance on a spiritual level. These numbers are considered sacred because they provide the seeker’s mind with a calm and steady state that helps in chanting. These numbers were also found auspicious and appropriate by the ancient sages.

In addition to 108 beads, the garland contains a Sumeru thread. It is a symbol of the Sushumna. It is also called a point. The 108 beads of the rosary are supposed to symbolize the 108 stages between the journey to and from the point of consciousness. The point is the ultimate limit to the expansion of the mind.

Rules of Chanting the Rosary

The garland of chanting should not be worn around the neck. After chanting, it should be placed in a bag. This will not have any external negative effect on the vibrations of the rosary. Never give your Japa Mala to another person for chanting. It is even said not to let anyone else’s eyes fall on it. Decorative garlands are not considered suitable for serious practice of chanting.

The rosary used in daily chanting becomes charged with powerful waves of mantra after some time. After some time of practice, whenever you take your mala in your hand, your mind will become calm, steady, silent and ready for chanting and all the emotions of your entire body will change.

If you chant a large number of times every day, keeping the hand with the rosary near the heart may start to hurt your hand. In such a situation, the hand needs some support. You can tie a garland-like cloth or towel around your neck and hang your hand in it if you wish.

Seekers who chant in large numbers are advised to use Gomukhi. The bag looks like a cow’s mouth. That is why it is called Gomukhi. It is a bag. The right hand and the rosary are placed inside it, so that the rosary cannot be seen from the outside. Gomukhi is very helpful in the ritual.