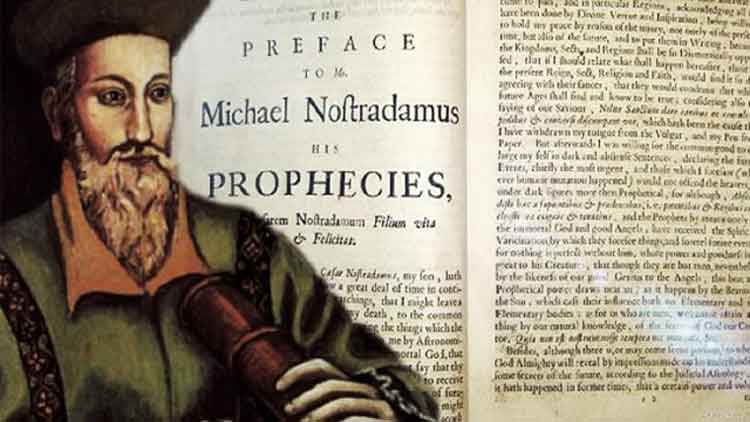 Nostradamus, a 16th-century French prophet, is famous around the world for his precise prophecies. He began his career as a doctor in France, where he taught medical science. He successfully treated the disease plague, which horrified the entire globe at the time.

In his book The Prophecies of the Century, he wrote his predictions in the form of poetry, which has been utilised to analyse numerous occurrences of the twentieth century.

On the 14th of December 1503, Nostradamus was born in Saint Remy, a hamlet in France.

He also enjoyed medical science and pursued greater study in mathematics, medical science, and astrology. He soon began to dazzle the rest of France with his abilities.

People began to travel from all over the country to see him in order to learn their fate and receive prophecies about themselves. Nostradamus rose to prominence as a famous French prophet as a youth.

Because astrology could not be seen with excellent eyes in those days, he had become a target of fundamentalists as his fame grew.

To keep Nostradamus away from astrology, his frightened parents sent him to the French city of Montpelier, a large French metropolis, to study medicine.

He completed his medical training and began treating others there as well, demonstrating his talent. While completing his medical education, he made such an impression on his university that it asked him to teach other pupils and work as a university teacher, which Nostradamus gladly accepted.

In his lifetime, Nostradamus married twice. He married a woman named Ann after his first wife died. Only after marrying Ann did his reputation as a prophet reach its pinnacle.

Nostradamus became so absorbed in his astrology that he quit his career as a doctor and focused solely on forecasts. He began preparing the annual calendar using his knowledge. People began to fear him as a result of his proved forecasts, which caught them off guard. Because of this, he had to deal with a lot of hardships in his final days.

They were accused of witchcraft by the French authorities, but the accusations were never proven. He became ill with ascites or ascites in the last few days.

The Cause of Nostradamus Death Is Unknown

He, who foresaw the future of the entire world, foresaw his own death and had his will written just before he died. On July 2, 1566, Nostradamus died.

Nostradamus Prophecies Have Proven To Be Correct

1. Nostradamus predicted that if he saw a young man, he would become Pope, and his prediction came true. Felice Peretti was the name of the young man who was elected Pope in 1585.

2. Nostradamus had predicted that both of Queen Catherine of France’s children would pass away at a young age.

3. He correctly foretold the outbreak of the First World War.

5. Predictions of Nostradamus In his poems from 2018, he mentions Germany’s tyrant Adolf Hitler, as well as the death of American President John F. Kennedy.

6. World War III is also described in Nostradamus’ book, in which he claims that it will be fought between two directions rather than between two countries. Only a few people will be able to escape this war as fireballs rain down from the sky.

The Effects of an Atomic Bomb Will Be Devastating

In his prophecy, Nostradamus said that an atomic bomb will be detonated in the year 2022, causing climate change. Aside from that, there could be a shift in the earth’s position.

There Will Be a Great Deal of Turbulence on the Planet

In his forecast for the year 2022, he mentioned a lot of terrifying things. He has predicted that the earth will suffer greatly this year. Asteroids have the potential to wreck devastation on Earth. Large rocks will collapse into the sea, causing devastating waves that will sweep across the globe. The rise in sea level will result in massive losses.

The Rate of Inflation Will Rise

In the year 2022, according to Nostradamus prediction, inflation will become unmanageable. The value of the United States $ will plunge. People will start viewing gold, silver, and bitcoin as property around 2022, according to a well-known French prophet. More money will be invested on these people, resulting in the ruin of the planet.

The Globe Will Be Engulfed In Darkness

Peace will come after the destruction, according to him, in the year 2022. The planet will be dark for 72 hours prior to this. He predicted that snow will fall on the mountains during the autumn season. A natural disaster will bring an end to the hostilities between numerous countries. After three days of darkness, modern life will come to an end.

France Is Experiencing a Severe Storm

In his prophecy, Nostradamus said that France would face a major problem in the year 2022. This country will be hit by a major storm, which will cause widespread devastation. Many parts of the world may experience catastrophic fire, drought, and flooding as a result of this storm. In the year 2022, there will be widespread hunger, according to the forecast.

Humans Will Be Attacked By Artificial Intelligence

In his prophecy, Nostradamus says something unexpected. He claims that by 2022, a computer’s brain would be able to control humans. Artificial intelligence human interface computers will rule in 2022. The human race will be extinguished as a result of this.

In The Mediterranean Sea, There Could Be an Explosion

In his forecast, Nostradamus prophesied a tremendous bang. This large explosion is expected to occur during a missile test in the Mediterranean Sea near the island of Menorca, according to forecasts.

Predictions of Nostradamus About India

Nostradamus also made a number of prophecies concerning India that turned out to be accurate.

He made the following prophecies regarding India:

1. Nostradamus foretold Indira Gandhi becoming Prime Minister and her assassination, both of which came true. He had predicted that a woman who had been expelled from authority would reclaim it, and that her opponents would be responsible for her death at the age of seventy.

2. Not only that, but in his book The Century Nostradamus Book of Predictions, he predicted Rajiv Gandhi’s rise to power and even his killing through his verses. In this stanza, he says that an aerodrome will quit his job and rise to prominence, being very well-known, but then being murdered by a lady, causing people to be upset.

3. He also wrote a poem about the unprovisional Janata Party rule in India in The Centuries, in which he predicts that after the flood, there will be a power with two heads, the first of which will hand over authority to the second. However, the house would be disbanded soon by the second head. In the Janata Party government, there was a choice between Devilal and VP Singh, and Devi Lal withdrew his candidacy.

5. Subhash Chandra Bose (Netaji Subhash Chandra Bose) Netaji Bose is also mentioned in his writings, in which he predicts that a person will hide in a submarine far away from the country and will be assisted by people of other languages, with whom he will show the path to his people. Thousands of people will die as a result of a brutal war.

7. The Century of Nostradamus on India his another prediction regarding India that people are hoping will come true is that a great person will be born in the land bordered by sea on three sides, which is India. He will be praised throughout the world, and he will proclaim Thursday to be a holy day. Nostradamus Modi’s prognostications People are currently linking this forecast with India’s Prime Minister, Shri Narendra Modi. It’s probable that they’ll make Thursday a public holiday in the near future.

8. A prophecy by Nostradamus concerning Modi Narendra Modi, India’s Prime Minister, and Nostradamus are perceived as adding another prophecy in which they claim there would be a great ‘Shayran’ in Asia who will be a scholar and a peace messenger. Whom everyone will initially despise, but who will eventually come to love.

9. Nostradamus on Hinduism, also predicted that Hinduism will advance significantly in the twenty-first century.

His book “The Centuries” contains forecasts for the following 12 centuries.

Every century contains 100 verses, i.e. in his book, Nostradamus has penned around 1200 verses. So far, predictions linked to 800 verses have been proven right out of 1200 verses.

Centuries have been used to make predictions up to the year 3797. World War III, according to the code of Nostradamus in his 18 prophecies, he mentions the Third World War. He had mentioned the revolutions that occurred in numerous nations between 2009 and 2013 in his poems.