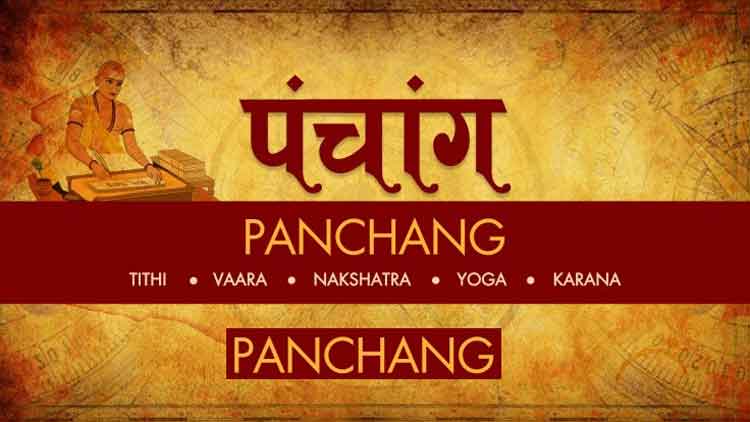 In Vedic Astrology, the Hindu Panchang is extremely important. It is considered that it is difficult to carry out a feast, festival, celebration, or job without consulting the panchang, because we can only find out the Tithi and Muhurat with the help of the panchang. On this page, you can see all of the essential elements of Hindu Panchangam.

The Muhurat is calculated based on the computations of five components of the Hindu Panchang. On this page, you will find information on panchang, such as the day and month, as well as popular panchangs from many states, including Day, Tithi, Nakshatra, Yoga, Karana, Sunrise-Sunset, and Moonrise-Moonset.

The Hindu Panchang, also known as Panchangam or Hindu calendar, is a collection of lunisolar calendars utilised extensively in Vedic Astrology. A static form of timekeeping is used, but it varies depending on the Moon or Sun Cycle, the names of the months, and the start of the New Year. The following are some of the regional calendars used in India:

The Panchang is a tabular record of important, auspicious dates and astrological information. A panchang is created based on the positions of planets, stars, and other celestial bodies. It is composed of two words: ‘Panch,’ which means ‘Five,’ and ‘Ang,’ which means ‘Limbs,’ i.e. ‘Five Limbs.’ It is derived from Sanskrit. Before beginning any auspicious endeavour, such as marriage, celebration, puja, or launching a business, it is important to determine a favourable day and time. Obstacles can be tracked and hurdles can be overcome by following this, increasing the success rate.

Benefits and Applications of Panchangam

In Hinduism, the Panchang is used to determine the state of the Moon, Sun, and other planets before undertaking any auspicious work, such as a marriage ceremony, birthday puja, or company inauguration. It has a number of benefits, which are as follows:

These are some of the most important aspects to consider when reading the Hindu Panchang. I hope you enjoyed this article and were able to find solutions to your questions.

The Hindu Panchang is made up of five distinct energy sources, which are as follows:

You can check the Panchang for today to see what time will be most beneficial for you to achieve your goals.

The Hindu Panchang and Its Astrological Importance

The following are three ways in which significance can be described in Astrology:

According to Vedic Astrology, there are five attributes, which are Tithi, Yoga, Karana, Nakshatra, and Var.

Almanac, a book that records astrological dates and other information.

In India, two types of lunar month systems are used: the Amanta or Sukladi system (when the New Moon ends) and the Purnimanta system (when the Full Moon begins) (when one Full Moon is covered until next). The Moon Is Full Lunar months are used in astrology to foretell the future and symbolise the name of the Solar Month’s star. The table is as follows:

When it comes to Hindu Panchang, astrology advises that Tithi or Date is one of the most important principles to consider. A Lunar month has 30 Tithis, each of which is completed when the Moon gains 12 degrees or a multiple of the Sun. They are further separated into five groups, each of which is extremely important when casting prophecies, offering treatments, and suggesting auspicious and unfavourable muhurats: