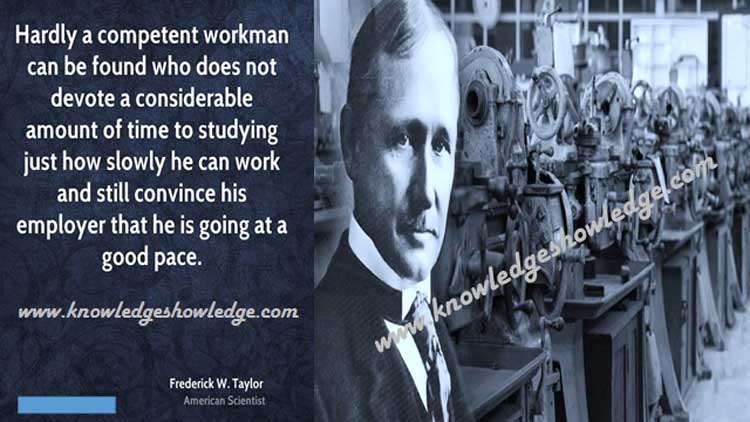 PRINCIPLES OF SCIENTIFIC MANAGEMENT | FREDERICK W. TAYLOR CONTRIBUTION TO THE THEORY OF MANAGEMENT

Frederick Winslow Taylor (1850-1915), well-known as the founder of this movement remains the most famous exponent of this approach, having had a worldwide influence for the last half century. Taylor has himself disclaimed credit for founding the movement, but the significance of conversion of board generalizations into practical management tools cannot be easily ignored. He is rightly called the father of Scientific Management.

Starting as an apprentice mechanics in Philadelphia, U.S.A. Taylor rose to be the chief engineer at the Midvale Engineering Works and later on served with the Bethlehem Steel Works were the experimented with his ideas and made the contribution to the management theory for which he is so well-known.

When Taylor entered the industry he saw that management was not aware of scientific techniques of work. The workers were not hard working. He tried to diagnose the causes of low efficiency in industry and came to the conclusion that much of waste and inefficiency is due to the lack of order and system in the methods of management.

He found that management was usually ignorant of the amount of work that could be done by an average worker in a day as also the best method of doing the job. The workers were not selected through any scientific system not they were trained. There was no pre planning for work. No standards were fixed as regards to time and cost of production, etc. So, he suggested the management to adopt a scientific approach in their work and make use of the ‘scientific methods’ for achieving higher efficiency.

Taylor held the view that instead of relying upon the workers to do their job by watching others, the management should condense the great mass of traditional knowledge to a science by, classifying, tabulating and reducing this knowledge to rules, laws and formulas. The following are the salient features of Scientific Management as propounded by Taylor.

“Scientific Management is the art of knowing exactly what you want men to do and then seeing that how they do it in the best and cheapest way.”

Scientific management was propounded by Frederick Winslow Taylor (1856-1915) who is the father of Scientific Management Taylor experimented in three companies: Miduale Steel, Semorids Rolling Machine and Bethlehem Steel and on the basis of his observation and findings he has propounded this principle.

There are four principles of scientific management:-

When the work done by the workers is productive the organisation will get more profit. Ultimately the workers will also get higher remuneration, resulting them to prosperity.

There are following techniques of scientific management:-

Under scientific management determines the task for every worker through careful scientific investigation. The standard task is the quantity of work which an average worker working under ideal standardized conditions will be able to do in a day. This was called ‘a fair day’s work’. Thus Taylor stressed upon standardization and pre-planning.

Planning is the heart to Taylor’s idea of scientific management. This planning was concerned with four things: What work has to be done, how it is to be done, where the work shall be done, when it will be done. The first question was to be dealt with by the management and the engineering department.

Taylor advocated the setting up of a planning department. This department will receive detailed instructions and formations relating to the type shape and quantity of products to be produced and the dead line by which the production is to be completed. In planning department four persons were to Work Programme Clerk, Instruction Clerk, Time and Cost Clerk, and A Disciplinarian.

It may be defined as the systematic, objective and critical examination of all the factors governing the operational efficiency of any specific activity in work study Taylor stressed on methods study, time study, fatigue study and scientific rate setting.

Under this study, the management must make an overall study of the entire production process. Then management should made efforts to reduce this distance to be travelled by materials during productive cycle, improvements in material handling, internal transportation, etc. On this basis, a ‘Process Chart’ setting out the various operations may be prepared. With the help of such study, the management can try to ensure that the plant is laid out in the best manners and it equipped with the best tools and machinery.

It is study of the movements of an operator (or a machine) in performing an operating for the purpose of eliminating useless motions. For conduction motion studies, workers are studied at their jobs and their all movements are noted. Then they are analyzed and useless motions are eliminated, thus a less time consuming and more efficient system of operations is developed.

The purpose of time study is to determine the proper (or standard time) for performing the operation. In the words of Kimball and Kimball, “Time study may be defined primarily as the art of observing and recording the time required to do each detailed element of an industrial operation. “Time study when done with motion study helps in determining the best method of doing a job, determining the standard quantity of one day’s work (standard task to be done by an average worker) and in rating the work.

Scientific Selection and Training of Workers

Taylor stressed on the systematization of selection according to the nature of requirement of job. Having selected the workers the management will assign tasks to them. Every job must be entrusted to the best available man in the factory. Proper attention should be devoted to the training of workers in the correct methods of work. This scientific management requires the prior training of workers before allotting them certain task in the plant.

Taylor suggested the standardization of not only production but tools, equipment’s and of working conditions also. He insisted upon the use and store of standard tools and equipment’s in order to get the best production. He advised the management to set an optimum speed for every machine and one best way to do each job. To attain the standard production, he insisted upon the maintenance of standard conditions of ventilation, heating, cooling, humidity, space and safety etc. The use of high quality raw material and good methods of handling materials were also stressed upon.

Taylor believed that financial incentives is the most appropriate incentive because man works for only money. To ensure the efficiency and speed of works he suggested the system of differential piece-rate wages. According to this system two piece-rate were to be determined. One for standard production and other for lower production then the standard limits. It was believed that each worker will try to raise his efficiency in order to get the wages at higher rates.

Under the traditional plant set up, usually one foreman was given the charge of a number of workers. But Taylor suggested the scheme of Functional Foremanship’ under the scheme, the two functions of ‘planning’ and doing’ the the separated in the organization of the plant. Four foremen will look after the planning work and other four will supervise the work in the shop. Taylor contemplated eight functional foremanship.

It involves the change of attitudes on both side. Actually, worker management co-operation may be regarded as the pedestal on which the structure of scientific management can be built. Taylor asserted that all the measures outlined in the system of scientific management will be fruitless until and unless there is a complete mental revolution on the part of both the management and the workers as to their outlook and attitude towards work and towards one another. Taylor advised that the methods of scientific investigations and knowledge must be accepted by both the parties without any mental reservation on their part.

To sum up, “the success of scientific managements rests primarily on a fundamental change in the attitude of management and workers both also their duty to co-operate in producing the largest possible surplus and as to the necessity of substituting exact scientific knowledge for opinions or the role of thumb of individual knowledge.”

As the workers are not given any opportunity to show their initiative and skill and are required to work strictly according to the directions of the foremen. It mars their initiative, introduces monotony in them and workers trade union movement. Thus the approach of scientific management was most inhuman in nature. These all weaknesses of this approach led to the emphasis on human relations in industry.