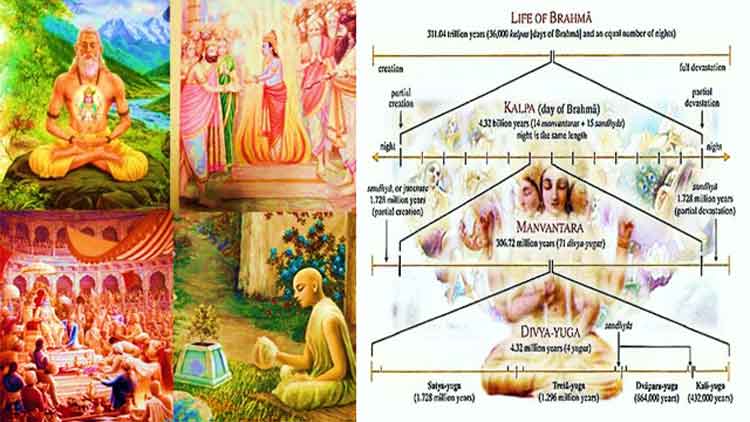 We all know that time is endless and impossible to calculate, yet man has divided time according to his convenience in seconds, minutes, hours, months, years, decades, and centuries in Hindu texts. In the same way that the largest unit of measurement of the supernatural time of the entire cosmos in Hindu scriptures is termed Yuga, it is divided into such units.

Throughout the decades, there has been a lot of mysterious information.

Before I give you information about this issue, let me tell you a storey from the Vayu Purana; after that, once we comprehend the ages, you will be able to understand it simply.

When King Revat’s daughter, who was very gentle and beautiful, became eligible for marriage, he began looking for a suitable groom for her in all four directions, but when he could not find one, he went to his Vice-Chancellor in despair, and the Vice-Chancellor, hearing his agony, said that since Brahma ji created the universe, you are the on. If you get near enough, they will undoubtedly assist you in this regard.

After a long voyage, King Revat and his daughter arrived at Brahma Lok and discovered that Brahma ji was enthralled by a Gandharva symphony, so he stayed for a few days till the event ended. And as soon as the programme ended, he went to Brahma ji and told him about his ordeal.

Hearing King Revat’s anguish, Brahma comforted him by saying, “Don’t worry, Lord Vishnu has taken birth on earth in the shape of Shri Krishna, and his elder brother Balram ji is a good bridegroom for Revathi.”

If I know everything there is to know about all the kings and princes in the world, how can I not know about Shri Krishna and Balarama?

Then Brahmaji smiled and said, “In front of the time of Brahma lok, time moves at a very fast speed, like earth lok, and that During your departure from earth lok and spending time here in brahmlok, Satyuga and Treta yuga have passed, and when you return there again, there will be a Dwapara Yuga going on, and that During this period, all the kings and princes of your time would have died”.

Many people will ridicule this by calling it imaginary, but I would advise those people to google and read the scientific argument that as we go upwards, so does gravity have a magnitude, and it also decreases, which is why the unit we measure time in, its speed also decreases, and this is why one day on the Moon equals 28 days on Earth.

Let’s continue with the storey: When King Revat was about to leave for the earth realm after listening to Brahma ji, Brahma ji informed him something else: just as a man experiences certain attributes at different times in his everyday life, so does Brahma ji. Similarly, there are some defining characteristics of the centuries, and the impact of these religious characteristics can be seen in human acts, colours, mannerisms, stature, and so on.

When King Revat and Ravati returned to earth after this, they were astounded to see the sight here; as soon as they arrived, they noticed that there was nothing like Satyug here; the complexion, stature of the people, and everything had changed; as a result, they went to Balaram ji and told him the entire storey.

Balram ji agreed to the marriage, but King Revat was troubled by a worry; it was a worry because in Satyuga, a man’s average length was 32 feet. However, it was just 11 feet in Dwapar. As a result of King Revat’s concern that Balram’s stature is much less than Revati’s, and that if this connection occurred, people would mock it, Balaram forced Revati’s shoulders down with his plough, and Revati’s height became Dwapar. Both of them drank as much as the women of the time, and then they married.

After hearing about Balaram ji’s marriage, I think you have a basic grasp of the eras; now let’s know more about it.

Four Era’s as per Hindu Civilisation

The Puranas, according to Hindu civilisation, are divided into four eras:

Every period has been described as being worse than the previous one. Moral ideals and social conventions are said to collapse when one era is succeeded by another. The period and place of the ages have been given significant prominence in history.

The Satya or Sat Yuga is the First Era

The maximum age of man in this era was 100000 years, while the length was about 32 feet, the pilgrimage of this era was Pushkar, and in this era there was no selfishness in the human mind, as a result, the amount of sin was zero, the currency of this era was gems, and utensils were made of gold, and human relationships were full of love and spirituality, free of all kinds of bondage, whereas in this age Matsya, Hagriva, Kurma, Varaha, and Narasimha incarnations of Lord Vishnu used to occur throughout this time period.

Treta Yuga is the Second Era

The length of this era is around 21 feet, and the maximum age of man in this era is 10000 years. The pilgrimage of Treta Yuga is Nimishyaranya, which is currently located near Lucknow. In Treta Yuga, I am selfish in human people. The instinct was aroused, and as a result, sins began; the rate of sin in this age was 25%; the currency was gold; utensils were silver; and the foundation of rules such as marriage for the union of man and woman were laid in this age.

It was established that the means of approaching God in this age was Yagya, and that the fifth, sixth, and seventh incarnations of Lord Vishnu, namely Vamana, Parashuram, and Shri Ram, were born in Treta itself.

Dwapar Yuga is the Third Era

The length of this era is around 11 feet, and the maximum age of a human being in this age is 1000 years. The pilgrimage is Kurkshetra, and the quantity of sin in this age is equal to the quantity of virtue. It increased to 50%, the currency was silver, and the utensils were copper. During this time, after the union of man and woman, there was talk of women’s exploitation and humiliation. This was the time of Lord Krishna’s incarnation.

Also Read: Kurkshetra: The Land of Mahabharat | The History of Kurukshetra Pilgrimage

Kali Yuga began on the 18th of February in the year 3102 BC, according to the renowned Indian astronomy book Surya Siddhanta. This date is also described in the Puranas as the time when Shri Krishna went to Vaikuntha.

According to the Kalki Purana, rape of women will proliferate in this era, and elements of selfishness and irresponsibility would be prevalent in both men and women.

According to legend, the amount of sin in the Kaliyuga would steadily increase to the point where Lord Vishnu will take on the Kalki avatar to protect humanity and religion. Lord Kalki would be born in a village named Sambal at the house of austere Brahmin Vishnuyasha, according to the Kalki Purana. Let me inform you that a village named Sambal is currently located in the Moradabad district of Uttar Pradesh.

According to the Kalki Purana, Kalki would have three brothers, just like Lord Rama, and his wife’s name will be Padma. Dharma will be able to stand on all four legs again.