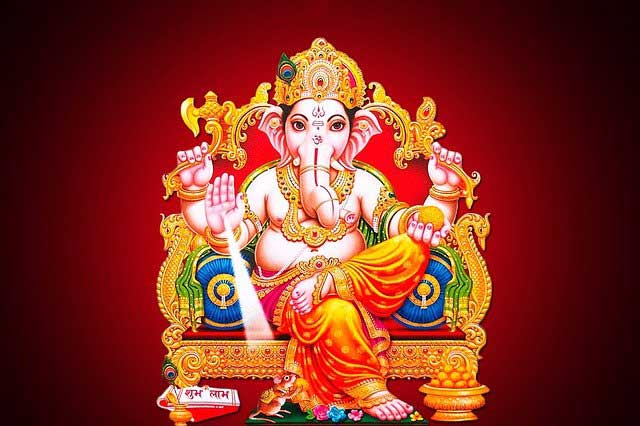 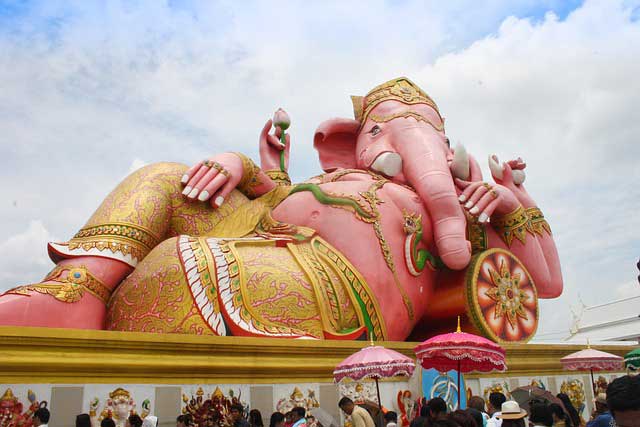 Shri Ganesha is the obstacle. Lord Ganesha is the first revered among the gods. He is also known by names like Ganapati, Vinayaka, Lambodar, Gajanan, Vighnaharta, Ekadanta and Shupakarna. Ganesh ji was born in the afternoon on the Chaturthi of Shukla Paksha of Bhado month. Gajanan is the god of wisdom. His vehicle is a rat. He has two wives Riddhi and Siddhi. Modak and laddus are his favorite food.

On this day, after retiring from bathing in the morning, make an idol of Ganesh ji of gold, copper, clay or cow dung. Fill this idol of Ganesh ji with water in an urn, tie a new cloth on the mouth of the urn and install it on it and do the Shodashopachar treatment Shri Ganesha Puja by offering vermilion. There is a law of offering 21 laddus to Lord Ganesha and Dakshina should be offered. Of these, five laddus should be given near the Ganesh idol and the rest should be given to Brahmins. Ganesh Chaturthi Puja is worshiped in the evening.

After worshiping the moon, offer dakshina to the Brahmins after offering them Arghya. The cloth covered Kalash should be given to the idol of Ganesh ji and Dakshina to Acharya with dedication and there is a law for immersion of Ganesha. This worship of Ganesha (Ganesh Chaturthi Puja) is done for education, intelligence, riddhi, accomplishment, removal of troubles and destruction of obstacles. Once according to the legend, Mahadev ji went to the banks of Narmada with Parvati ji. There Parvati ji expressed her desire to play chaupad with Mahadev ji at a delightful place. Shiva said who will be the witness of our defeat and victory? Parvati ji immediately removed the grass straws from there and made an effigy and consecrated life in it and said, son, you will decide our defeat and victory in this quadruped game. Parvati ji won all three times in the game. But when the child was asked, he declared Mahadev ji victorious.

As a result, Parvati ji got angry and cursed him to suffer by being lame with one leg and lying in the mud there. Then the boy asked for forgiveness and said politely, “Mother, I did not do all this intentionally, it has happened because of ignorance”. Then Parvati ji said that Nagkanya will come here for Ganesh worship, by her teachings you will get me by fasting Ganesha. Saying this she went to Mount Kailash.

After a year, Nagkanya came there in the month of Sawan to worship Ganesha. Knowing the method of fasting Ganesha from the snake girls, that child fasted and worshiped Lord Ganesha for 12 days. Then Ganesh ji, pleased with his fast, appeared to him and asked him to ask for the desired boon. The boy said, O! May God give me so much strength that I can reach my parents on Mount Kailash. Ganesh ji disappeared by saying ‘Tatastu’. The child reached the feet of Lord Shiva. Shiva ji asked the child the means of reaching there. The boy told the whole story to Shiva.

From that day onwards Parvati ji also got angry and alienated from Shiva and left from there. After that Lord Shankar ji also fasted and worshiped Ganesh ji for 21 days. Due to the effect of this fast, a desire arose in Parvati ji’s mind to meet Shankar ji herself and she soon reached Kailash and asked Shiva ji what was the remedy you took, as a result of which Bhagi Bhagi came to you. Shiva narrated the whole story to Parvati.

Then Parvati ji, wishing to meet her son Kartikeya, worshiped Ganesh ji with Durva, flowers and laddus for 21 days for 21 days. On the 21st day Kartikeya himself came to meet Parvati. He also observed this fast after hearing the importance of this fast from the mouth of his mother. Kartikeya ji told this fast to Vishwamitra ji. Vishwamitra ji fasted and asked Shri Ganesh ji for the boon of being free from birth. Ganesh ji fulfilled his wish.

According to another story, Mahadev ji went to Bhogavati for bath. After his departure, Parvati ji made an effigy of her body by applying rubbish on her body and removing the dirt from her body. He was named Ganesh. Then Parvati ji told him that son, I am taking a bath, take your mudgal and stand at the door and do not let any man inside without my permission. Mother went for bath. Then Mahadev ji came there and started going inside. Ganesh ji stopped him at the door and even after much persuasion, Ganesh ji did not listen and did not let him inside to obey his mother.

On this, Shiva understood his insult and in anger cut off the head of Ganesha. Parvati ji understood that perhaps Shiva ji was angry due to the delay in the meal. He immediately called Shiva after serving food in two plates. Shiva asked for whom this second plate is for. Parvati ji replied that it is for the son Ganesha, who is guarding the door. Then Shiva told that he had beheaded that child. Parvati ji was very sad on this. Mahadev ji was also saddened by this and to relieve Parvati ji, he attached the head of the elephant child to the body of the child.

Parvati ji was very pleased to have son Ganesha in this way. She herself ate food by lovingly feeding her husband and son. This incident happened on Bhadrapada Shukla Chaturthi, hence this date is celebrated as a holy festival.

Wishing you all a very Happy Ganesh Chaturthi from Knowledge Showledge. May the blessings of Lord Shri Ganesh ji always remain in the lives of all of you.