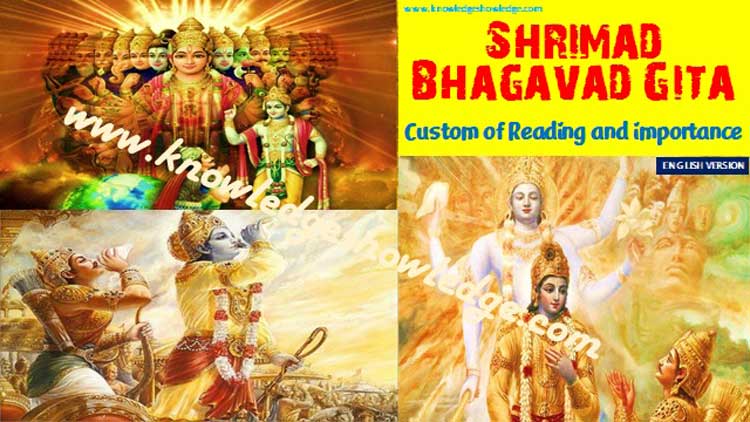 The Shrimadbhagavad Gita contains verses recited by Lord Krishna to his friend Arjuna during the Dwapar era. The 700 verses of the Gita narrated by Lord Krishna from Arjuna serve as the guide of the science of self-realization. There is no other scripture like this in expressing the nature of man, his surroundings and his relationship with Lord Krishna. The Bhagavad Gita is called the essence of the Upanishads and the Vedas.

At some point in life, man is plagued with the problem of why I was born into this world, where I was before birth and where I will go after death. What can I do to find peace and contentment in this life? Etc! The answers to such questions and queries are contained in the Srimad Bhagavad Gita The solution to the mental and emotional problems of human beings in ordinary life is also obtained from Srimad Bhagavad Gita.

Men and women who recite the virtuous form of Srimad Bhagavad Gita should do this holy recitation with a concentrated mind and spend more time in understanding its essence. It is proper for every reader to form the notion that I am Arjuna and that Lord Krishna is instructing me to overcome all the vices in me such as sin, guilt, inaction, irresponsibility, cowardice and weakness etc.

They are awakening the immortal power of the soul, they are describing my own form of consciousness and they are eager to motivate, excite and excite me to do self-actualized deeds without being lazy. I am the dear disciple of Sri Bhagavan, the most beloved devotee and the most devoted listener. With such excellent thoughts, the reader of the Gita becomes a recipient of God’s grace and the essence of the Gita is easily absorbed in it.

God Himself has told Srimukh that reciting the Gita and listening to it is Gyan-Yajna, from which I am worshiped. The reader should become a faithful and reverent host and perform this Yajna with great seriousness and consider it to be the supreme worship of God. From this feeling the knowledge of the Gita, in the heart of the reader, begins to be self-published.

Shrimadbhagavadgita is a precious Chintamani Ratna in the Gyannidhi of Hindus, Amrit-Kumbh in the ocean of literature and Kalpataru in the garden of ideas

Srimad Bhagavad Gita is a combination of Sankhya, Patanjali and Vedanta. It has an unprecedented unity of knowledge, karma and devotion, a wacky representation of optimism, a higher encouragement of duty karma and the best description of bhaktibhav.

The Bhagavad Gita is the Ganga of self-knowledge. It describes the most holy ways of washing away the dust of sin and guilt. The best decision of karma-dharma, bandh-moksha has been made in this. The Gita is the essence of God, the succulent songs in which the sentiments of the Upanishads, the spirit of devotion is fully absorbed and the essence of the Veda has also come.

The complete reflection of Narayani Gita also exists in Srimad Bhagavad Gita. Its own originality is also very sweet and captivating. In short, it is true that Lord Krishna has completely filled the ocean of knowledge in the Gita Gagar.

There is great glory of Karma Yoga in Srimad Bhagavad Gita. Doing karma with a sense of duty without putting hope in the fruits of karma is karma yoga. It is non-attachment not to be engrossed in infatuation, affection and lust while performing duties. Surrendering all one’s deeds, including one’s knowledge, arguments and opinions, to the refuge of God with mind, word, body, not to be arrogant and to sacrifice one’s deeds including oneself on the altar of devotion of Vidhata There is devotional karma yoga; That is true sannyasa.

In the time of Lord Krishna, people considered knowledge and sannyasa as matarupa and condemned karma. For this reason, Shri Maharaj has laid more emphasis on duty and has prohibited resignation.

Shrimad Bhagavad Gita rupa songs of Lord Krishna are very simple, very beautiful, very powerful, very substantial and very excellent. In them truth and philosophy are represented in the best way. By listening to them, reading, meditating and making decisions, the inner soul of man is inevitably awakened, the light of the Sun of Truth in his Chidakash must shine and there is no doubt in his ultimate welfare. By drinking the Gita’s Upadeshamrit with emotion, the devotee attains the ultimate abode of God by himself easily.

The greatness of Srimad Bhagavad Gita is important that by settling it in life and bringing it into deeds, the personal, family and social life of man is improved and his world is improved and at the same time his realization of Atma-Paramatma is his birth. – There is also liberation from bondage.