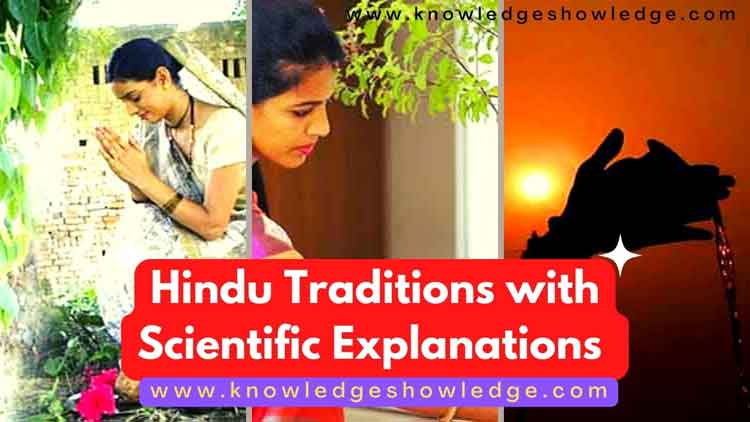 One of the oldest civilizations in the world is that of India. And Hinduism is the world’s oldest religion. India’s population adheres to several Hindu traditions. We frequently are unaware of the reasoning behind these customs. For instance, why do we adore the peepal and tulsi trees? Why is the Ganga seen as being so holy? Why should the Ganges receive the ashes left behind after death? We shall investigate the scientific basis for several Hindu traditions in this post. Let’s learn about Hindu tradition and the science behind it (Hindu dharma and science).

Why Is Sugar And Curd Consumed Before Leaving The House?

Before she left for her examinations, my mother used to feed us curd and sugar. Hindu custom dictates that we consume curd and sugar before someone leaves the house to perform good job in order to ensure the success of their efforts.

Calcium and protein are abundant in yoghurt. Contrarily, sugar includes a lot of glucose, which gives you energy by taking away your fatigue. It also soothes the gastrointestinal tract. It is a wise decision to eat it before leaving the house. It works well as a reward before any stressful activity.

What Motivates Your Riverbank Coin Toss?

Coins are said to bring luck when thrown into this pond. However, there is a scientific justification for it.

Historically, copper was used more frequently than stainless steel to manufacture money. An essential metal that is beneficial to the human body is copper. Our forebears made sure there was a means to toss pennies into the river. So that we drink enough water that contains copper. The second justification is that when water is added to copper, the water is kept clean.

Hindu texts claim that as long as a person’s ashes are still in the Ganges, their spirit will continue to live happily in the company of lucky people. The journey of the dead soul doesn’t start until the ashes of the deceased are not thrown into the Ganges. The deceased’s ashes are placed in a holy water source when the cremation is complete. In general, casting the ashes into the Ganges is said to be more fortunate.

It has been demonstrated via scientific study of bones that they contain an excessive amount of phosphorus. It has a unique capacity to make the soil fertile by the application of manure. The Ganga River is the biggest in our agricultural nation. Nearly half of India is traversed by the Ganges. Therefore, the ground will be exceedingly productive wherever this water flows.

What Is The Purpose Of Early Morning Water Offerings To The Sun?

The custom of giving water to the Sun dates back a very long time. According to religious texts, the Sun God is delighted when water is offered to him, and mankind are not subject to the Sun’s wrath. It is thought that this gets rid of the zodiac flaws.

Science says that just before sunrise, the sun’s beams are not extremely intense. The sun’s rays are like medication for the body. The sun’s rays fall on our eyes and body as we present water to the rising sun while standing in the stream of water and gazing at the sun. Thus, the danger of jaundice, TB, and heart problems is decreased and the eyesight improves. The sun’s rays are another source of vitamin D. In addition to this, giving water to the sun in the morning also provides us with clean oxygen.

The tulsi plant is still revered in the majority of houses today. Hinduism holds that worshipping tulsi results in contentment, wealth, and happiness in the home.

Tulsi purifies the atmosphere, according to science. The home where a Tulsi plant is located has a clean environment. Tulsi cleanses the air by chasing away bacteria and pests.

Additionally, basil possesses disease-preventive qualities. Eating its leaves boosts immunity and enhances the body’s defences. The immune system is strengthened by tulsi (immunity booster). Therefore, if a tree is present in the home, its leaves will also be utilised to treat ailments and clean the tree of them.

Tulsi is regarded as a Sanjeevani herb at the very least. In order for Tulsi to be planted and cared for by people from all walks of life, she was granted the status of a goddess. Tulsi is a crucial medication. Basil may be used to flavour tea, preserving the body’s vitality and preventing a variety of illnesses.

Tulsi is planted inside the home in the belief that snakes cannot get inside.

The happiness and prosperity of the home are said to improve when Peepal is worshipped every day. Lakshmi’s grace is still present. The scriptures claim that Lord Brahma, Lord Vishnu, and Lord Shiva all live on Peepal. On this, it has also been said that Lakshmi and Pitra’s home is.

According to science, Peepal emit oxygen for 24 hours, which is essential for human survival. The Peepal tree offers ushta (heat) in the winter and chill (coolness) in the summer. Every component of the Peepal tree, including the stem, leaves, bark, and fruits, is utilized in Ayurvedic medicine to treat a wide range of severe illnesses.

Keeping this tree from being taken down is another justification. This tree is not taken down, hence it is vital to revere it. Because the Peepal tree produces the most oxygen, which is vital for life.

People cherish this tree and do not cut it down since it is revered. The Peepal tree is the only one that produces oxygen even at night.

What Makes Ganga A Mother?

On the Ganges River, India’s population of nearly half has no fear. India’s biggest river is the Ganga. In a sense, the Ganges River is what nourishes us. The Ganges has also given us wonderful cultivable land as a gift in addition to water. For this reason, Ganga has been accorded the title of mother by the sages.

We adore Ganga because we think of her as our mother and want to preserve her purity. On the other hand, people these days make Ganga out to be quite filthy, which is completely incorrect.

Due to the presence of certain natural components in its water, Ganga is also regarded as holy because when the body comes into contact with it, it becomes healthy and pure.

In Hinduism, cow faeces is highly revered. It’s against the law for cow poop to be worth more than gold. But should it be seen as empty or is there a purpose for it?

Cow urine contains a lot of Sulphur and mercury (mercury) elemental components. By consuming cow pee, diseases including those of the liver and spleen can be healed. Cancer and infectious disorders are both cured and eliminated by cow urine. Cow urine has anti-inflammatory properties and is spicy, pungent, hot, saline, astringent, mild, igneous, and good for the mind. It also has choleretic and phlegmatic properties and is used to treat leprosy, colic, rheumatism, stomach, bloating, itching, eye-disease, mouth disease, kilaskodha, and other vat-related diseases.

Only itching, leprosy, colic, mouth illness, and eye urine should be consumed if cow pee is consumed.

Cow’s urine has astringent, bitter, and pungent properties. If applied to the ear, it has anti-colic and spleen properties. It also has properties that treat colic, goosebumps, apha, kamala, and pandurog as well as breathing, coughing, swelling, diarrhoea, and constipation.