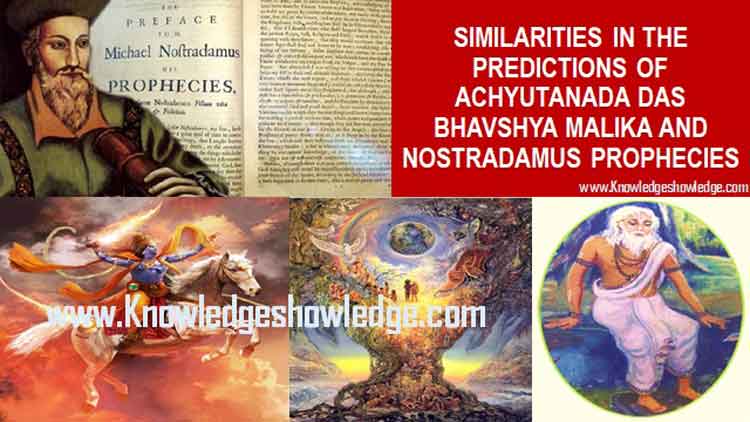 During the 16th century, Nostradamus was a well-known French foreteller. He was a well-known doctor and a competent instructor in addition to being a foreteller. He was a fantastic doctor who could treat illnesses like the plague. He was a poet who used to write poetry that described future occurrences in advance. His forecasts were initially dismissed as inaccurate and meaningless, but when they began to come true among ordinary people in the twentieth century, they became extremely popular.

He made many predictions, including Hitler’s rule, terrorist attacks on America and World War II. Nostradamus is known for his book Les Propheties. This book was published in the year 1555. The now nearly eight-part documentary explores the life and prophecies of Nostradamus, with 942 predictions about the future.

Who was Saint Achyutananda Das ji?

The famous saint Achyutananda das is thought to have been born in the 16th century (January 10, 1510, Magha Shukla Paksha Ekadashi). Achyutanand ji (Achyutanand das) was a famous devotee, poet, seer, and Vaishnava saint of Lord Jagannath, according to legend. Scholars place his time period between 1480 and 1505. He was born in Tilokna/Tilkana, a hamlet in Mahanadi’s irrigated land (Chitotpala). Padmavati was his mother’s name, and Dinabandhu Khuntia was his father’s. Gopinath Mohanty, his grandpa, worked as a scribe at the Jagannath temple, Odissa.

What is Bhavishya Malika?

The prophecies in Saint Achyutanand Maharaj’s book ‘Bhavishya Malika,’ published 500 years ago near Jagannath in Orissa, are going viral. Achyutananda ji is revered in Orissa as a famous yogi and saint blessed with heavenly abilities. These prophesies were written on palm leaves by him. People say he wrote all of his novels using his yogic abilities. In Orissa, it is estimated that there are one lakh owner’s books. However, only a few persons have access to information regarding hundreds of volumes at this moment. Despite the fact that the Mahants of Jagannath Puri own all of these texts.

Let us know about the similarity in their predictions:-

‘A round mountain of one mile diameter from space,’ according to Nostradamus.

It will fall and submerge the huge kingdoms in sea water; this calamity will occur when peace is replaced by disease and floods. Many magnificent countries with ancient existence will be founded by this asteroid. (1-69) there will be calm after the catastrophe. There will be 72 hours of darkness in the globe before this peace. Snow will fall on the mountains, and many countries’ battles will stop almost immediately. This is due to a natural occurrence.

It will appear as if two suns are rising in the sky. It will be a celestial body that will fall into the Bay of Bengal, submerging Odisha; the sea level will increase, and water will reach the 22nd step of Jagannath temple; then the Lord’s Deity would be transported to Chhatiyabata by his followers. There will be darkness on the world for 7 days due to natural calamities on the planet. There will be natural disasters on the one hand, and a big battle on the other. The third world war will begin when Saturn enters Aquarius. A vast portion of North America will be flooded.

A Great Politician Will Born in India

The rise of a great politician in the famed island country of the Five Rivers would be predicted by Nostradamas. This politician will be known as ‘Varana’ or ‘Sharan.’ He will use the air to put a stop to an enemy’s craziness, killing six people in the process. ‘It will be born in the sea, encircled by three sides, which will declare Thursday a holiday.’ (Century v-27) His reputation and adoration will grow in strength, and no one on land or sea will be able to match him.’ (Formula Century 1-50wf)

The final king of India would be a powerful Hindu monarch who was a yogi and had no offspring. He will have incredible leadership abilities and will be able to promote peace via religion. Gajapati Maharaj would be the last king of Odisha at the time. Lord Kalki will arrive during this time and will aid India in the conflict.

Third World War Will Be a Horrible Experience

‘With all the weapons and documentation in a submarine, the guy will reach the Italian shore and start the war,’ said Nostradamus. His convoy would arrive on the Italian coast from afar.’ (11-5) 1…While the third battle is in progress, China will launch a chemical strike in Asia, causing havoc and death, which has never happened before. – (vi-51).

The globe will suffer in the last phases because to Shani’s late return, and the empire will fall into the hands of a dark country. (1111-92). On October 27, 2025, Aries, the king of Asia, will also become the emperor of Miss, bringing the third kind of climate under his control. Christians will die, lose, and be ashamed as a result of wars. (3/77 century).

China will attack India alongside 13 Muslim nations during the Third World War, which will last six years and six months. India will be participating in the fight for the next 13 months, and it will be the struggle of India. India will triumph in this, not only annihilating its foes for all time, but also becoming a world guru.

Epidemic Will Cause Global Disruption

In his book of prophecies, Nostradamus discusses the Third World War. “Religion Watega will turn people black and white and red and drink between the two, fighting for their rights,” he wrote of the outbreak of the Third World War. Bloodshed, plagues, starvation, drought, conflict, and hunger will all kill humanity. (Vi-10/L) The plague is referenced several times by Nostradamus.

The life-giving sun will become the life-taking sun at the conclusion of Achyutanand Das Kalyug. The Kalpavriksha, or sacred banyan tree of the Jagannath temple, will collapse due to the cyclonic storm in Odisha, and thousands of people would die as a result. A typhoon dubbed Fani hit Ohinsa in May 2019, and this banyan tree was uprooted. The Karona pandemic broke out around the end of the nineteenth century, and people began to die. Adhyayutanand Das ji has also pointed out the pandemic by writing sickness in various locations.

Hindu Sanatana Dharma Shall Be the World’s Religion

‘A religion called after the oceans will develop and terrify people quicker than those who rely on the moon,’ two men injured by ‘A’ and ‘A’, according to Nostradamus. (X-96) A leader from southern India will arise to keep the entire globe unified.” Russia would abandon communism and welcome Hinduism during that period.’ Following a lengthy era of communalism and hatred, all religions and castes will adopt the same worldview. (6-10) 1

China will be shattered into several fragments. Pakistan’s name would be forgotten, and the powers fighting with Pakistan will become weak and pitiful. Russia will convert to Hinduism. Fighting for Europe will be pointless. The population will be insignificant. After that, there will be a 1,000-year period of calm.

“Any of the information/materials/calculations provided in this news is not guaranteed to be accurate or reliable.” This information was gathered and distributed to you in a variety of ways. Our sole objective is to give information to its users, and it is solely for educational reasons. This data is based on common belief, which may or may not be accurate.