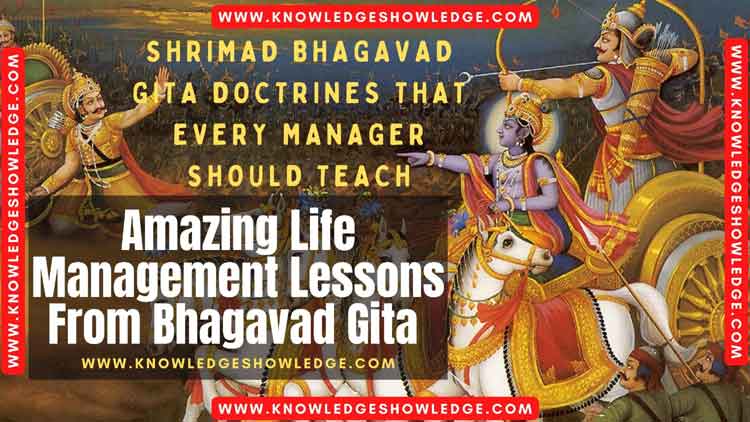 According to Hindu beliefs, the Bhagavad Gita has given the solution to all the problems of life, such as any dilemma in the mind, any difficulty in making a decision, or business management. Although this legendary book is hundreds of years old, even today it is being used to gain the correct knowledge of success in life.

Bhagavad Gita is considered supreme among Hindus, it solves every problem that people face every other day. In this way, if you study Bhagavad Gita Quotes, your every problem will be solved. Along with this, you can also get the mantra to make your business successful from this Gita.

Meaning: A noble man should always behave sweetly. Because more people are holding your business.

Management Sutra: A person who occupies a major position. He should act according to the dignity of his position. Because what a great man does, the common man adopts it as his ideal in his life.

Meaning: Work, anger and greed, these are the three gates of hell, which are the destroyers of the soul, i.e. the destroyers, so man should renounce these three.

Management Sutra: In human, work i.e. desires, anger and greed are the root causes of all evils. Lord Krishna said work, anger and greed are the gates of hell. Because a person who has these 3 evils inside, they are always engaged in fulfilling their selfishness by hurting others. So if you want to achieve any goal then you have to give up these three vices. Because as long as these evils remain in your mind, we will continue to stray from our goal.

Meaning: Man should always act according to his religion.

Meaning: Shri Krishna tells Arjuna that a man should subdue all his senses, because the intelligence of a man whose senses are subjugated is stable.

Management Sutra: Tongue, skin, eyes, ears, nose etc. Through which man enjoys all worldly pleasures. For example, the tongue is satisfied by tasting different tastes, the eyes are pleased by seeing a beautiful sight. Shri Krishna tells Arjuna that the person who controls his senses is the one whose intellect is stable. A person whose intelligence is stable reaches the heights in his field.

Meaning: While preaching to Arjuna, Krishna tells Arjuna that by giving up the urge not to do karma, by being Equanimeous in the matter of success and failure, by becoming yogic, doing karma, doing equanimity is called yoga.

Management Sutra: Religion really means duty, but we are often limited to rituals, worship, shrines in the name of religion. The scriptures of Hinduism call duty as religion. Lord Krishna tells Arjuna that one should never think about fame and disgrace and loss and gain in fulfilling one’s duty. Working by focusing the intellect only on your duty will give you better results and peace of mind which will make your yoga with God easier.

Meaning: One who abandons all desires and egos within man and fulfils his duties is always happy.

Management Sutra: Lord Krishna is telling Arjuna that a man who has any kind of desire in his mind can never attain peace. To attain peace, man must erase desires from his mind. Whatever action we take, we stick our expected results with it. The desire for the consequences of our choices makes us vulnerable. By erasing the feelings of love or ego from the mind and performing one’s duties with concentration, one will attain peace.

If you want to be successful in your business, you must follow the things written in Shrimad Bhagavad Gita, so that you can reach your destination.

Management Sutra: We all want to find happiness, we wander for it, but the root of happiness is in our mind. A man whose mind is involved in the senses, i.e. wealth, lust, laziness, etc., does not have Bhavana (self-knowledge). A man who does not have feelings in his mind never finds peace. Therefore, it is very important to have control of the mind to attain happiness.