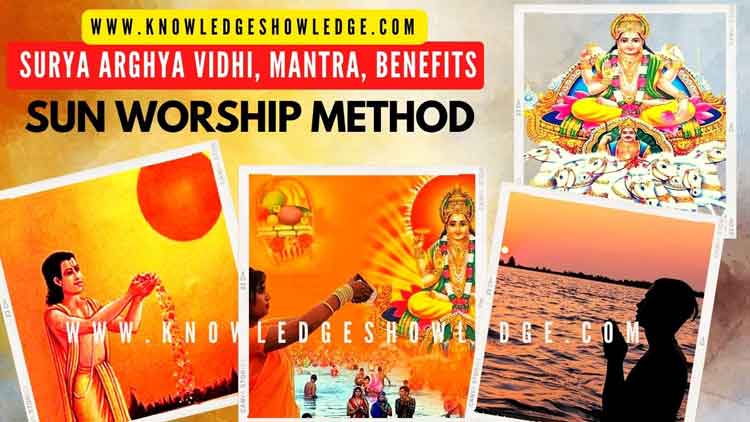 Sun worship: Lord Surya has been worshiped since time immemorial. The Sun is regarded as the source of all energy in all worlds. Suryadev is considered to be a direct deity because we get his darshan. It is believed that by worshiping the Sun, one gets freedom from diseases. Worship of the Hindu god Surya is said to bear fruit shortly. Whose spiritual practice was also done by Lord Shri Ram himself. It is to be known that the ancestors of Lord Shri Ram were also Suryavanshi. Lord Krishna’s son Samba was also able to cure leprosy only by worshiping the Sun. In astrology, the Sun is considered the karaka planet of the Self.

Surya is also called Aditya. In all the Vedas, Upanishads and Puranas, Lord Aditya has been revered as the Supreme Brahman. About them, Lord Krishna told Arjuna, ‘Aditya is the mantra. Aditya is the lord of the three worlds and the fourteen Bhuvans. Scholars believe that Surya worship is such a process, whose benefits are received hand-in-hand. You can take this experience yourself by offering water to the Sun.

To offer Arghya to the Sun God, after taking a holy bath, face the east and worship Lord Surya with different flowers, after doing Marjan twice and Abhyukshana thrice. While reciting the Gayatri Mantra, offer Guggul incense to the Sun God. Before offering Arghya, make an appropriation of the sun.

While giving Arghya, while meditating on Lord Surya, chant the Surya Upasana Mantra –

Those who cannot recite this mantra should offer Arghya while chanting:-

Keep in mind that the correct time of sunrise is from sunrise and three hours after sunset. If there is a delay due to any reason, then give an Arghya with Gayatri Mantra as an atonement.

Fill a copper vessel with water and offer Arghya slowly to the rising sun. By doing this you will feel that hot steam coming out of your forehead is merging in the atmosphere. In the scriptures, before starting any worship or work, it is said to remember Ganesha first. Therefore chant:-

After this, worship the Guru on your left side. If there is no Guru then worship Lord Shiva. Worship Ganesha on the right side. The deity being worshipped. Keep it in front of you. Place a picture or idol of Lord Surya here in front of you. Now take a resolution and start the worship.

Collect all these materials and start the worship. First of all, take water in the right hand and sprinkle it on yourself and all the material and say this mantra –

After reciting the mantra, again take water in the right hand and pour the water on the earth while reciting the following mantra.

After this, chant the following mantras

Then after washing hands, take water, akshat and flowers in the right hand and make appropriation. Offer arghya to the Sun while reciting the mantras of Surya Kavach and Sun God.

Most Effective 12 mantras of Lord Sun or Surya Dev

If you want to get good health and want to increase your ability to work, then you should chant the first mantra of the sun god regularly while offering him argha.

If you are suffering from tuberculosis and want to improve the blood circulation of your body, stand in front of the sun and chant this mantra. It also removes diseases related to phlegm.

For mental peace, one should chant this mantra of the sun god. It also increases intelligence.

You can chant this mantra for bladder problems.

This mantra should be chanted for problems related to the rectum. Its chanting develops intelligence and increases the strength of the body.

If you want to increase your strength and patience, chant this mantra. This also engages the mind in religious activities.

By chanting this mantra, one gets a healthy body. This does not cause any diseases to humans.

Recitation of this mantra sharpens intelligence and removes financial problems.

Recitation of this mantra keeps the inner and outer body clean. Also, the mind is happy.

Offer arghya to the sun regularly every day to get his grace. If not every day, offer Arghya every Sunday and chant one of these mantras. This will bring happiness, prosperity and good health.