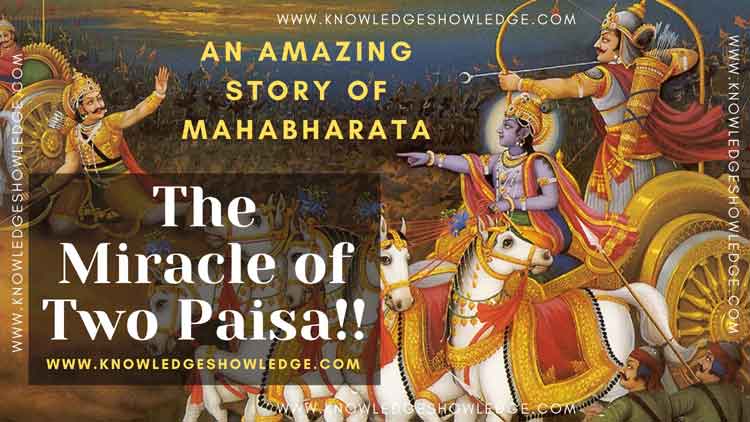 The Miracle of Two Paisa!! – Amazing Story of Mahabharata

Once Shri Krishna and Arjuna went on a tour, they saw a poor Brahmin begging for alms on the way.

Arjuna took pity on him and gave the Brahmin a bundle full of gold coins.

Having found this, the Brahmin happily returned home seeing beautiful dreams of his happy future.

But his misfortune was going with him, on the way a robber snatched that bundle from him.

The Brahmin was saddened and again engaged in begging. The next day when Arjuna’s eyes fell on that Brahmin, he asked him the reason for this.

The Brahmin narrated all the details to Arjuna, Arjuna again felt pity on him after hearing the Brahmin’s plight, he thought and this time he gave a valuable ruby ​​to the Brahmin.

The Brahmin reached home with him, there was an old pot in his house which was not used for a long time, and the Brahmin hid the ruby​in that pot for fear of being stolen.

But his misfortune, due to being a tired man for the whole day, he fell asleep, meanwhile the Brahmin’s woman went to get water in the river, but on the way her pot broke, she thought, would have brought the old pot lying in the house. Thinking so, she returned home and went away with that old pot and as soon as she dipped the pot in the river, the ruby ​​also got washed away with the stream of water.

Also Read: What is Akshauhini Sena in Mahabharata?

When the Brahmin came to know about this, cursing his fate, he again engaged in begging.

When Arjuna and Shri Krishna again saw him in this poor state, they went and asked his reason.

Hearing the whole story, Arjun got very frustrated and started thinking in his mind that there can never be happiness in the life of this unfortunate Brahmin.

Now the Lord’s Leela started from here. He donated two paise to that Brahmin.

Then Arjuna asked him, “Lord, my coins and rubies also could not eradicate the poverty of this unfortunate, then what will happen to it with these two money”?

Hearing this, the Lord just smiled and asked Arjuna to go after that Brahmin.

Also Read: God and The Glutton Devotee – An Inspirational Story

On the way, the Brahmin was going thinking that “With two paise, even a person will not get food, why did the Lord give him such a petty charity? What kind of pastime is this of the Lord”?

Thinking as he was going away, his eyes fell on a fisherman, he saw that a fish was trapped in the fisherman’s net, and it was yearning to be released.

The Brahmin took pity on that fish. He believed “the fire of the belly will not be quenched with these two paisa but only the life of this fish could be saved”.

Thinking this, he made a deal for that fish for two paisa and put the fish in his kamandal. Water filled the kamandal and started leaving the fish in the river.

Then something came out of the mouth of the fish. The poor Brahmin saw that it was the same ruby ​​that he had hidden in the pitcher.

The Brahmin started shouting with joy “got it, got it”..!!!

Then fortunately that robber was also passing by who had looted the coins of Brahmin.

He heard the Brahmin shouting “Got it, Got it” The robber got frightened. He thought that the Brahmin had recognized him and that is why he was shouting, now he will go and complain about him in the court.

Fearing this, he started crying and begging for forgiveness from the Brahmin. And all the money looted from him was also returned to him.

Seeing this, Arjuna could not live without bowing before the Lord.

Arjuna said, Lord, what kind of leela is this? Your two paisa did the work that a bag full of gold coins and valuable rubies could not do.

Shri Krishna said, “Arjun, this is the difference of his own thinking, when you gave the poor man a bag full of gold coins and valuable rubies, then he only thought of his own happiness. But when I gave him two paisa, he thought of the other’s sorrow. Therefore, O Arjuna, the truth is, when you think about the suffering of others, when you are doing good to others, then you are doing God’s work, and then God is with you.