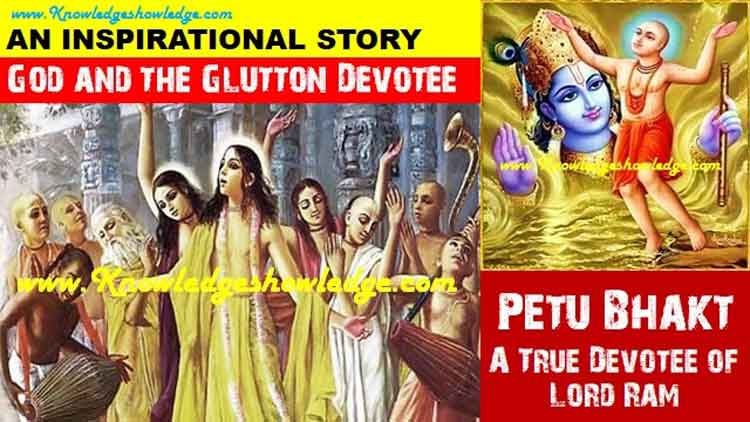 God and the Glutton Devotee

God is considered to be emotionally hungry. True faith is what God relies on. Only out of his real devotion did Lord Shri Ram eat Shabari’s berry. Shri Krishna forsook the pleasures of Duryodhana’s palace and dined at Vidur’s residence on green roti. Read the account of one such naïve Shri Ram devotee, where Shri Ram and Sita ji had to have their own fun while offering it.

There was once upon a time a young boy. He does not conduct any business during the day. Eat, drink, and go a hundred times. He spent the entire day at home.

Now the poor creature is unsure of what to do. What should I do now? The most pressing issue is what to eat. He encountered a saint along the road. Saints are naturally good people. The youngster told them about his ordeal. Go to Ayodhya ji, the guru advised. Your fleet will be crossed by Ram ji.

Ayodhya ji has finally arrived. Now consider your options. I’m not sure where I’m going to stay. Outside a temple, a monk was sitting. When he saw the sadhu, he thought to himself, “The sadhu Maharaj is very strong.” You must have consumed a substantial amount of food. At the same time, four or five Sadhu Maharaj disciples approached him. He was also a formidable opponent. In his mind, he had made up his mind that I would be his pupil. You will be able to consume a substantial amount of food.

He approached Sadhu Maharaj and requested that he be made his disciple. Sadhu Maharaj began to say, “Become.” “Sir, what will I have to do?” the young man began. He began by suggesting that if you accomplish small things in the temple, I will initiate you. The Lord’s name is being chanted.

Sir, the boy claimed he’s alright, but what will I eat? That gourmet was always focused on his food. Food would be available twice a day, according to Sadhu Maharaj.

When he wakes up after a few days, he notices that all of the stoves are cold. I started asking Guru ji if the food will be prepared today. On Ekadashi, the Guru stated, we should all fast. We’ll all be powerless.

The boy then went on to say that if I fast on Ekadashi, I won’t be able to view Dwadashi. Because I’m starving. The Guru was moved by sympathy. He claimed that the stove would not work in this location. Take rations from Bhandara and prepare and consume food at the banks of the Sarju River. The Guru said to offer food to Ram ji after preparing it while walking.

Prepare meals on the banks of the Sarju River. Before eating, Guru ji was reminded that he should offer bhog to Ram ji first.

After putting the meal on the platter, I began calling Ram ji. Ram ji, please accept my bread and drink Sarju water. Ram ji, on the other hand, did not show up. That gourmet had never witnessed how Ram’s Bhog was served in the temple. He imagined Ram ji serving bhog in the same manner as we eat meals.

When Ram ji did not arrive, he became irritated and began to remark, “You are not coming because you get many different forms of satisfaction in the temple.” You’re not coming to help me make dry roti. However, I must inform you that you will not be able to eat at the temple today; why is Ekadashi fasting today?

Food will not be prepared today. You will continue to be hungry. He began calling Ram ji once more. Ram ji, together with Sita ji, appeared to him, pleased with his innocence. He began by saying, “Lord, I had called you for pleasure.” Who is this person you have with you? Ram ji began by introducing Sita ji as his Ardhangini. I began to believe that the food would be less. Allow one to speak up. Come on, it’s all right. He now offered both Ram ji and Sita ji bhog.

When the next Ekadashi arrived, Guru ji advised, offer greater ration this time. Because there are more Gods who come to offer Bhog there. Perhaps he was more hungry than usual, the Guru reasoned. That is why it is expressing itself in this manner. He was given more rations by the Guru.

“Sita Ram, come, come and offer the bhog,” he began calling out after preparing the food this time. Lakshman ji was also present this time. Who is this, said the Lord? He is my younger brother, according to Prabhu. Now I believe that if you call one, two will arrive. If two people are summoned, three people will arrive. He made meals available to all three of them.

Guru ji, I want more ration because so many gods visit there, I said on the next Ekadashi. With a shake of his head, the Guru speculated that he might have sold the ration. I’ll have to check it out this time.

This God-follower was likewise remarkable. I stated that this time I would not prepare the food first. I’ll start with them. I’ll prepare as much food as God provides.

Shri Ram, Sita Ram, come, bring Lakshman ji with you, come and provide food, said the Lord. This is the first time the entire Ram family has arrived. Lord, I am aware of Sita ji and Lakshman ji. Is there anyone else? My younger brother Bharat, Shatrughan, and my devotee Hanuman ji, said the Lord.

Lord, replied the boy “I didn’t make anything this time. Do it, you’re all chefs. Make a deal with Bhog and feed me as well. After seeing such a devotee, Ram ji smiles. Sita ji is getting ready to eat. The rest of the Ram family is busy with other tasks.” I’ve been doing it.

Guru ji arrived at that moment. See how many Gods have arrived, Guruji said. No one was able to see Guru ji. “Lord, you are seeing me, why can’t Guru ji see it?” he began to say to Ram ji.

Because you called me with a basic and pure attitude, Ram ji said, I came. Your Guru has never addressed me with such simplicity and emotion.

The child was now stranded. You must also offer darshan to my guru. Because it is only because of my Guru ji that I have got the opportunity to see you. How would I have seen you if Guru ji had not said that Ram ji must be offered bhog?