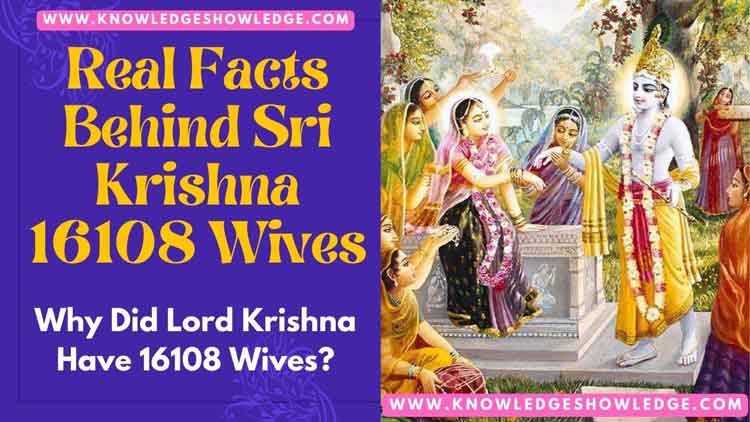 The Truth Behind Lord Krishna 16108 Wives

We have all read about the 16108 queens of Krishna. In fact, the role of Krishna’s 16,108 wives was created during the Rama incarnation in the Treta Yuga. In the Tretayuga, Sri Rama had decided to be a patnivrati but at that time many young women wanted to get Sri Rama as their husband. That is why he had promised to accept those young women as wives in the Dwapara Yuga. In Dwapara Yuga, the same young women became the wives of Krishna. Let’s see who was whose incarnation.

She was the incarnation of Gunavati, the Brahmini of Treta. In fact, in the Treta age, in a city called Mayapuri, an ascetic Brahmin named Dev Sharma lived with his daughter Gunavati. He had a gifted disciple named Chandra. Seeing Chandra’s talent, Dev Sharma considered him worthy of everything and married his daughter to him. One day, both Dev Sharma and Chandra went to the forest to collect the Samidha for the sacrifice. There a demon devoured them both. The virtuous woman became destitute. She sold everything she had, performed Shraddha Karma for her father and husband and then began to earn a living by begging.

Gunavati was very sad about the death of her husband and father. After some time she came to Ayodhya with the pilgrims for a Sarayu bath and there she met Lord Rama and had darshan of him. and begged them to take us, Lord, into their refuge. Take me as your wife. But Lord Rama told him that in this life I am a wife-worshipper. This is not possible for it but your wish will surely come true.

In the Dwapara age, when I will incarnate as Krishna, you will become my wife by the name of Satyabhama. In that birth, your father will be named Dev Sharma Satrajit. There your husband Chandra, will be My devotee named Akrura, then you will marry me as Satyabhama. After her death, she became the wife of Krishna as Satyabhama.

Goddess Kalindi was the human form of Yamuna. Sri Rama once visited Mathura on the occasion of the marriage of Shatrughna’s son Subahu. He was lying on the banks of the Yamuna when Yamuna appeared in the form of a woman and began to make love to him. Then Sri Rama told him that it is not possible for me to marry you because I am a wife-worshipper in this age but I promise you that your wish will be fulfilled at the time of Krishna’s incarnation in Dwapara. And then in Dwapara Yuga, Krishna took the human form of Yamunaji, Kalindi.

The virgin goddess of Kanya Kumari took incarnation as Jambavanti in the Dwapara Yuga. Once, Sri Rama visited Kanya Kumari during a pilgrimage. There, Devi Kumari was waiting for Sri Rama with the garland. Then he pleadingly said to Sri Rama, “Lord, my parents had arranged my marriage with Surendra and he had left with the wedding party. That’s when I realized that you had taken incarnation, that’s why we decided not to get married. My father got angry and threw the wedding jewelery into the sea which still occasionally comes out of the ocean waves. I’ve been expecting you ever since.

Now that you have arrived, fulfill my wish. To this Sri Rama said that this is not possible, because in this life I have decided to remain a wife-worshipper. Therefore, this wish of yours will be fulfilled during the incarnation of Shri Krishna in the Dwapara age. You will then be born as Jambavanti, the daughter of Jamvanta, the king of bears. And then I will take your hand. In the Dwapara Yuga, the same virgin goddess assumed the form of Jambavanti, and became the wife of Krishna.

Sri Rama once went to the forest for hunting. There, while chasing a lion, he suddenly reached a cave. As soon as Sri Rama killed him he came in human form and told that Lord I am a Vidyadhara. I had committed adultery with a sage wife. For this, I was cursed by the wife of the sage and made a lion. And later, at my request, he had shown mercy and said that after you died from the arrows of Lord Rama, you would get your old body back.

So today I got rid of your arrows. At the same time the Lord saw a huge cave in front of him. There were four peasant women, who were only a skeleton in the name of human beings. God distracted them. Then she started asking the introduction of Sri Rama, who are you? Was Dundubhi killed? Then the Lord introduced Himself after this she was happy. Then he told us that Lord Dundubhi had kidnapped us.

We are four Brahmin girls. And this huge stone at the entrance of the cave has 16000 more maidens inside it. That Dundubhi wished to marry 100,000 women at once. For this he would kidnap young women from anywhere and lock them in the same cave and put a rock on the outside. So Lord, save them too and save us all.

After that, the Lord wanted to give him a gift, so he asked the Lord to make him his wife. Then Lord Sri Rama promised them that since I am a wife-worshipper in Treta incarnation, this is not possible for me but in Krishna incarnation when I will appear as Krishna, then you four will become my wives. In Dwapara Yuga, the same four ascetic Brahmin young women were born as Nagnajiti, Bhadra, Lakshmana and Mitra Vrinda and became the wives of Krishna.

Once Sri Rama was residing in Ayodhya. At the same time, 100 gentle women from Ayodhya came and touched the feet of Lord Rama. Lord Sri Rama was spending the night on the sand in a camp on the banks of the Sarayu. Then when Sri Rama saw that these women were present there, he asked them the reason for coming to them. The rest of them could not say anything out of shame but one woman boldly said to the Lord, O Lord! We want to get married and enjoy ourselves with you. Fulfill our wishes.

Then Sri Rama told him that I am a wife-worshipper in this life but your wish will be fulfilled in Dwapara Yuga. When I am born as Sri Krishna at the time of Krishna incarnation, then all 100 women will become my wives. In the Dwapara Yuga, the same hundred gentle women of Ayodhya became the wives of Krishna.

Once, at the request of the sages, Lord Rama had made 16 golden idols of Sita and donated them to the sages. Then the sages were pleased and gave him the boon that in the next life he would get 1000 women as wives in exchange for an idol. Thus the gift was to bear fruit. Above we have mentioned four divine ascetics.

After rescuing them, when Lord Sri Rama removed the huge rock from the front of the cave, he found 1600 girls trapped inside it. Sri Rama freed them. The girls were pleased and begged Sri Rama to make them his wife. Then Sri Rama told them that he was a wife. And it promised them that in the Dwapara age, in the incarnation of Sri Krishna, I would take you all by the hand.

At that time you will all be held captive by Narakasura and I will rescue you all. Now you go to your father’s house and when you renounce your body by observing austerities, you will find us again in Dwapara. Thus, in Dwapara Yuga, these sixteen thousand young women were taken prisoner by Narakasura, whom Krishna freed by Vath of Narakasura and took the hand of all those 16,000 young women. Thus, in Rama incarnation, Krishna fulfilled the promises made by Sri Rama and married a total of 16108 women.