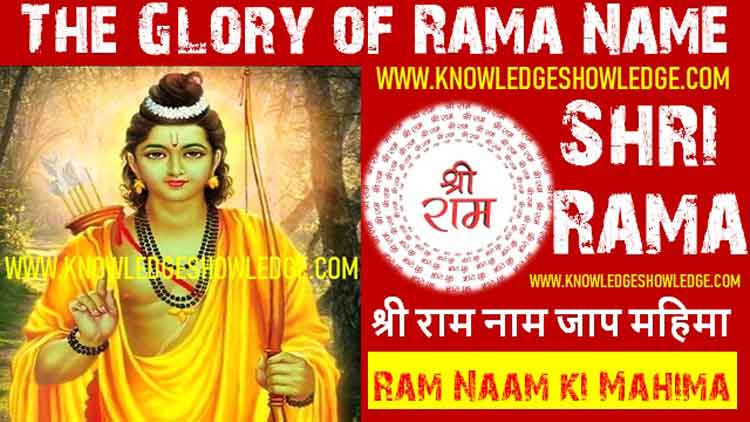 The glory of the name Ram is unmatched. Even the stones get wet by chanting the name of Ram. Ram Naam is such a great mantra which does not require any rule or legislation to be chanted. We can take the name of Ram in happiness, in sorrow, on someone’s birth, on death, anywhere.

Ram Naam is embedded in all the colors of our life. It is the name of Rama which naturally we take in every situation in birth, on death, surprise, happiness, gummy, surprise.

A guru was teaching Vishnu Sahasranama to a group of young boys. The Guru repeated the verse:

Then he said to the boys, if you chant the name of Rama thrice, it is equivalent to chanting the entire Vishnu Sahasranama or the name of God 1000 times.

The wise and accomplished guru, who was a great devotee of Lord Rama, explained very simply, Lord Shiva says that the name of Lord Rama is sweeter than all words and the chanting of this name is the complete Vishnu Sahasranama or 1000 names of Vishnu. It is equivalent to chanting.

To confirm that chanting Rama Naam 3 times = 1000 times or equivalent to chanting the entire Vishnu Sahasranama, here is an interesting numerical calculation-

There are two Sanskrit letters in the name of Rama – Ra and Ma.

The boy was pleased with this answer and started learning Vishnu Sahasranama with full concentration and devotion.

Thanking this inquisitive child, let us spread this information to maximum brothers and chant the name of Ram at least 1000 times daily in the morning and evening.

They appreciate it when the meaning or purpose of performing a ritual or worship is explained to others, especially children. And understanding their meaning, not in coercion, but with reverence, follow them. Wisdom comes from knowledge and experience.

Why Is Ram Ram Called Twice Together?

What is the secret behind Ram-Ram speaking together?

In Hinduism, when many people meet, they address each other as Ram-Ram. Do you know what is considered the reason for saying Ram Ram twice simultaneously? Such a tradition is going on since time immemorial.

Once the sum of Ram’s name happened 54

When we chant a mantra, we spin a rosary of 108 beads. It is believed that just by saying Ram-Ram, the whole rosary is chanted.

The glory of Ram Naam is unmatched.

Even stones get wet with the glory of Ram’s name.

The glory of Ram’s name was proved by Hanuman ji when sage Vishwamitra asked Shri Ram to punish him with death.

Balmiki ji became pure even by chanting the name of Ram in reverse (Mara-Mara).

Tulsidas ji says that if you want light both inside and outside, then keep a gem-lamp in the form of Ram Naam on the door like mouth, on the tongue of the door.

They believe that Ramkatha is famous in the Vedas. No one worries about the one who chants the name of Ram. Ram Naam is greater than both Nirguna Brahma and Saguna Ram. The name of Shri Ram is similar to Kalpataru.

We can take the name of Ram in happiness, in sorrow, on someone’s birth, on death, anywhere.

Tulsidas Ji Glorified The Name Of Ram In Ramcharitmanas

Tulsidas ji says that I worship the name of Raghunath ji, Krishna (fire), Bhanu (sun) and Himkar (moon) are the seeds in the form of ‘Ra’, ‘A’ and ‘M’. That Rama name is Brahma, Vishnu and Shiva is the form. It is the life of Vedas. Lord Shiva chants this mantra named Ram. Balmiki ji became pure even by chanting the name of Ram (Mara-Mara) in reverse.

Tulsidas ji says that if you want light both inside and outside, then keep a gem-lamp in the form of Ram Naam on the door like mouth, on the tongue of the door. The people of the universe created by Brahma chant this name of Ram.

They believe that Ramkatha is famous in the Vedas. The person who chants the name of Ram does not have any worries. Ram Naam is greater than both Nirguna Brahma and Saguna Ram. The name of Shri Ram is similar to Kalpataru.

In Kaliyuga, the name of Ram has been glorified by Tulsidas ji in Ramcharitmanas that-

Means – Tulsidas ji says that there is neither yoga, nor yagya, nor knowledge in Kaliyuga, only the name of Ram is the only foundation, who renounces all trust and sings the name of Shri Ram and sings his virtues.

Means – One who chants the name of Shri Ram, the ocean gets submerged, there is no doubt about it. The glory of the name is evident in Kaliyuga. There is a holy glory of Kali Yuga that there are mental virtues but there are no mental sins.

Means – If you believe, then there is no era like Kaliyug because in Kaliyuga, by singing the pure qualities of Shri Ram, man gets immersed in the ocean of the world without any effort.

Means – Those who have love at the feet of Shri Ram do not spread the religion of Kaal. O bird king! Just like the deceit (game) of Nut (Juggler) is difficult (inaccessible) to the one who sees it, but the servant of the Juggler (Jambhure) does not find his illusion, but the Vyapati Bhava Sevak does not find his game inaccessible.

Means – The defects and virtues created by the Maya of Shri Hari do not go away without the worship of Shri Hari (Ram). Thinking like this, leaving all desires, one should worship the name of Shri Ram in Kaliyuga.

Sumukhi! I am Ram! RAM ! RAM ! While chanting in this way, I relentlessly rejoice in the name of the Supreme Lord Shri Ram. The name of Ram is equivalent to the complete Sahasranama.

Before the Lanka war, when Hanuman ji came after finding Sita and Samudra Dev suggested Shri Ram to build a bridge over the sea.

The entire monkey army was working for the construction of a bridge on the sea. Shri Ram was watching by writing his name and putting stones in water, he gets wet.

Shri Ram started thinking in his mind that if the stones get soaked in my name, then the stone thrown by me in the sea will also get wet. But as soon as Shri Ram put the stone in the water, he drowned.

Shri Ram wondered why this happened?

Hanuman ji was watching this whole incident. Hanuman ji started asking what the Lord was thinking. Shri Ram started saying that the stone on which Hanuman has written my name is burning the stone but why did the stone put by me drown in the water.

Hanuman ji started saying that the stones are floating in the water because of the Lord holding your name, but who can save the stones which you are giving up yourself from drowning? That is, the name of Shri Ram is going to be drawn from the ocean of Bhava.

Hanuman ji proved the name of Ram bigger than Ram

It is said that when Shri Ram became the king of Ayodhya, there was a debate in his meeting whether Ram is big or Ram’s name is big.

When Hanuman ji came to know that Shri Ram ji was going to punish him with death, he went and sat under a tree. And started chanting the tune of Ram Ram. He got his attention while reciting the name of Ram.

When Shri Ram ji reached there, he fired many arrows at Hanuman ji but not even a hair of Hanuman ji was plucked. But to fulfill the orders of his guru, Ram ji also fired Brahmastra on him but that too failed.

This happened because Hanuman ji was continuously chanting Ram Ram. Sage Vishisht then told sage Vishwamitra that you get Ram out of this religious crisis. Hanuman Ram is memorizing Ram. That’s why not even a single hair of Hanuman is getting frisky.

On the other hand, Shri Ram was upset due to not being able to fulfill the orders of his Guru. Then Vishwamitra freed Shri Ram from his word. Then Narad ji told that Hanuman did not insult the sage Vishwamitra.