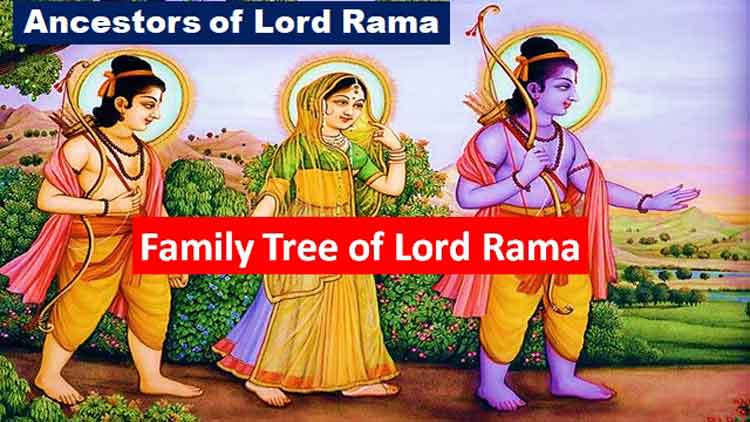 Guru Vashishtji depicted Rama’s family as follows in the Balkand of the Ramayana:

4. Vivasvan changed his name to Vaivasvatmanu.

5. During the period of Vaivasvata Manu, there was a flood. Ikshvaku was one of Vaivasvatmanu’s ten sons.

6. Ikshvaku created the Ikshvaku clan by making Ayodhya his capital.

10. The sons of Baan became Anaranya.

16. Susandhi was born from Mandhata.

18. Bharata was the son of Dhruvasandhi.

19. Bharata have a son named Asit.

20. Sagar was Asit’s son. Sagara, the king of Ayodhya, had a magnificent figure.

21. Asmanj was the name of Sagara’s son.

24. Dilip’s son became Bhagiratha, and Bhagiratha was the one who brought Ganga to earth.

25. Kakutstha was Bhagirath’s son, and

26. Raghu was Kakutstha’s son. The name of this dynasty was changed to Raghuvansh after Raghu, who was a great and powerful ruler. The Rama family is also known as Raghukul.

Also Read: 108 Name of Lord Rama as per Padam Puram

29. Sudarshan was one of Shankhana’s sons.

33. Prashushruka, the son of Maru, and

34. Ambarish, the son of Prashushruka.

44. Shurasen was the previous name for Mathura.

44. When Rama chose to take Vanaprastha and intended to perform Bharata’s coronation, Bharata refused. As a result, Kush in the South Kosal region of Chhattisgarh and Luv in the North Kosal were declared holy.

45. The kingdom of Kosala was divided into Uttar Kosala and Dakshin Kosala even during Rama’s time. Rama granted his son Luv the kingdom of Sharavati and Kush the kingdom of Kushavati, according to Kalidasa’s Raghuvansh.

46. If Sharavati is considered Shravasti, then the kingdoms of Lava and Kush were most likely in North India and South Kosala, respectively. Kushavati, in today’s Bilaspur district, was Kush’s capital.

47. Kaushalya, Rama’s mother, is said to have been born in Kosala.

48. Raghuvansh claims that Kush had to traverse Vindhyachal to get to Ayodhya, indicating that his realm was in South Kosala.

49. King Luv, whose dynasty included the Burgujars, Jayas, and Sikarvars, gave birth to the Raghav Rajputs. The Sisodia Rajput dynasty, which included monarchs from the Baichla (Baisla) and Gehlot (Guhil) dynasties, was the dynasty’s second branch. Kushwaha (Kachwah) Rajputs are descended from Kush.

52. Later on, Lavpuri was renamed Lohapuri. Laos, a Southeast Asian country, and Lobpuri, a Thai city, are both named after him.

54. The Kush dynasty’s King Sirdhwaja had a daughter named Sita.

55. The Suryavansh went even farther, with the son of a king named Kriti becoming Janak, a yoga practitioner.

56. The Kushwaha, Maurya, Saini, and Shakya sects are thought to have originated with the Kush dynasty.

56. According to study, there were surgery in the 50th generation of Luv and Kush who fought on the side of the Kauravas in the Mahabharata battle. If Lav and Kush are to be counted, they occurred between 2500 and 3000 years before the Mahabharata period, or 6,500 to 7,000 years ago.

58. As a result, it was established that current Rajput clans such as Sisodia, Kushwaha (Kachwah), Maurya, Shakya, Baichla (Baisla), and Gehlot (Guhil) are all descended from Lord Shri Ram.

59. Maharani Padmini of Jaipur and her family members are descended from Kush, Rama’s son.

60. Maharani Padmini claimed that her husband Bhavani Singh was the 309th descendant of Kush on an English channel.

61. When it comes to the family’s history, Maharaj Mansingh, who was born on August 21, 1921, married three times. Mansingh married three times, the first time to Marudhar Kanwar, the second time to Kishore Kanwar, and the third time to Gayatri Devi.

62. Maharaja Mansingh’s first wife gave birth to a son named Bhawani Singh. Princess Padmini was Bhavani Singh’s wife. However, neither of them have a son; they do have a daughter, Diya, who is married to Narendra Singh. Padmanabh Singh is Diya’s elder son, and Lakshyaraj Singh is Diya’s younger son.