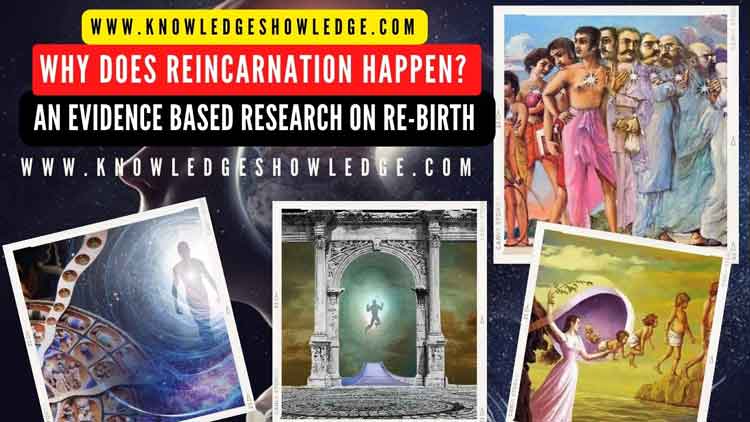 Learn what are the possible reasons for the soul to come to earth in repeated births?

The Mystery of Reincarnation – Secrets of Rebirth

Certain classes of people in the world believe that a person is not born again and again and that each person has only one birth. If this assumption is accepted as true, many questions related to human life that are essential to obtain answers cannot be obtained.

Some remain healthy for life while others suffer from various diseases from birth or from a young age. Some are very focused on the works of religion while others are only interested in half and immorality. If there is no previous birth, why do different types of persons come into the world with different types of nature and destiny and what is the special thing that determines the destiny of a person.

To know the answers to such and many such questions, it becomes necessary to study the Vedas and guidance provided to the world by the great sages of Hinduism from time to time according to which the auspicious and inauspicious events in the present life of the person directly The relationship is related to the previous births of the person and the good and bad deeds of the person’s present life are related to his future births.

Concepts like spirituality, karma and astrology have had their own special place on the land of India for centuries and from time to time people of different classes have also received guidance from them. People who believe in these concepts have the question from time to time as to why a person keeps having repeated births and what possible reasons for reincarnation can or do occur. Let us discuss today through this article what are the possible reasons for a soul to take rebirth and come to earth again and again.

Why Does Reincarnation Happen?

This simple rule is very useful for the general public to understand that if an action done by a person benefits others, then such actions are good actions and if an action done by a person causes harm to others, then so Karma is bad karma, that is, action that benefits someone else is called good action and action that causes harm or damage to someone else is called evil action.

Having understood the basic definition of good and bad actions, let us now see how bad and even good actions can cause a soul to be reborn again and again. When a soul commits various kinds of evil deeds in a particular birth, it has to be reborn to suffer the certain reward for those evil deeds.

For example if a person in his some life has done a lot of harassment to his wife or he has caused suffering to many persons for his benefit in that life of his or he has committed heinous deeds like murdering a person then all these In order to suffer certain rewards in the prescription of the law for bad deeds, such a person would have to be reborn and suffer the consequences of his bad deeds.

After bad deeds let us now see how good deeds done by a person can cause that person to be reborn. Many persons even begin to wonder when they hear that even doing good deeds can lead to repeated rebirths and if so, why.

To understand the reason for this, suppose a person in one of his births donated a large amount of money to a temple or did some other good deed for the construction or expansion of this temple and at the same time wished that As a result of this charity or this good deed, it should get some of its desired fruits such as getting a lot of wealth or getting a lot of fame or something else like that.

Similarly, in a particular birth, a person does many kinds of good deeds desiring special rewards, some of which he gets in the same life, but some of which are postponed for the next birth go due to which such a person has to be reborn and in his next birth also due to good deeds done with the desire for some similar reward such a person may have to take another birth again and so again and again This process of birth continues.

It is worth noting here that in order to receive the reward of good deeds, a person has to be reborn only if he has desired the reward while doing such good deeds. If a person does many good deeds in one of his births for which such person does not desire reward, then such good deeds done without desiring reward cannot cause rebirth of the person because this person so his good deeds He did not ask for or want the fruit which is why there is no rebirth to pay for these actions.

This is called Nishkaam Karma, that is, an action which is a good action but at the time of doing it the doer has not desired any kind of reward. Therefore, the good deeds of a person can cause his rebirth only if, while performing these deeds, such a person has desired the auspicious fruits of these deeds, not otherwise.

Also Watch: Mantras for All Purpose | Mantra Chanting as per Karma or Deeds

The Cycle of Rebirth

Some people sometimes even ask such a question that thus then if we do evil deeds and do not even desire its rewards then such evil deeds will also be unselfish deeds and thus us to pay the rewards of evil deeds also pun: You don’t have to be born.

Therefore, even if a person takes out a debt even if he wants to, he cannot become free from the debt by merely resolving to free himself from the debt by his own will and for the actual freedom from the debt, this person must pay this debt. Therefore, even after doing bad deeds without the desire for reward, one has to suffer the reward. On the other hand, the fruit of a good deed is our earnings or our deposits and it can be released by one’s resolution just as any person can release his earnings or deposits.

Good deeds done without the desire for reward are called Nishkaam Karma and among all kinds of karmas, only Nishkaam Karma is the karma which does not cause a person to be born again and again. The reason for this is very obvious, you worked hard and you decided not to reap the rewards of that hard work.

Whether or not to take the fruit of labor depends on the will of the laborer and every person in the world has the freedom to labor for free but to take a debt to any person in the world and forgive that debt on his own freedom is not attained and similar laws are true in the prescription of the fruits of good and bad actions.

Therefore, it is necessary to know and understand here that in this journey of birth after birth, the greatest obstacle to a soul achieving salvation or liberation is bad deeds, done with the desire for fruit that is, there are also desirable good deeds because in both cases you have to be reborn to enjoy the fruits of such deeds. Swami Vivekananda has said that in the journey of liberation of the soul, bad deeds are shackles of iron while desirable good deeds are shackles of gold, but the shackles are shackles, whether they are made of iron or gold.

The Doctrine of Reincarnation

So if you want to get rid of this sequence of repeated rebirths and you attain salvation or liberation, then it is necessary for you to stop doing bad deeds and the desire for their rewards while doing good deeds Give up, that is, do unselfish good deeds so that you will not have to be reborn to enjoy the fruits of such deeds.