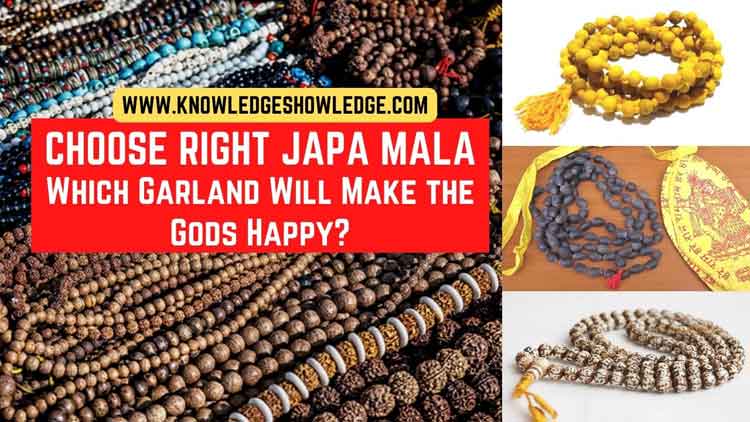 Which Garland Will Make the Gods Happy?

Chanting has a specific meaning in Hinduism when it is performed during devotion. It is common knowledge that Lord Shiva can be appeased by chanting Maha Mrityunjaya while wearing a Rudraksha rosary. You may have frequently observed sadhus holding various sorts of garlands in temples or other religious settings. Another kind of sadhna is rosary recitation. Therefore, be aware of which garland will please which god.

Use the Appropriate Rosary [Japa Mala (Garland)] to Chant

People do worship to appease the gods and goddesses, but the most potent and effective way to appease them swiftly is to sing mantras. Mantras have a lot of power, according to religious books and light. If recited correctly and wholeheartedly, the favour of God is attained very quickly. Do you aware that there are guidelines that must be followed when chanting a certain deity? For example, when would be the best moment to begin chanting, which garland to utilize, etc.

Chanting Lord Shiva while wearing a Rudraksha rosary is good. As a result, Lord Shiva is instantly pleased and grants all of his requests.

Lakshmi ji’s blessings are crucial in life. Always recite the Lakshmi Mantra while holding a lotus garland to attract happiness, success, and money in life.

It is recommended to recite to Lord Vishnu while wearing a garland made of sandalwood and basil, according to legend.

Using a crystal garland, one should chant the mantras of Saraswati, the goddess of wisdom. By doing this, money will be available as well as the ability to keep the mind at ease. It is stated that wearing a rhinestone garland has no impact on a person’s negativity.

It is advisable to sing the mantras of Lord Shri Ganesh and Devguru Brihaspati while wearing a turmeric garland. Lord Ganesha. The time it takes to acquire the results is short.

It is recommended that you repeat Maa Kali’s mantras while wearing a black turmeric or indigo lotus garland.

The greatest way to win Maa Amba over is with a rhinestone wreath. Chant these while wearing a sphatik garland.

According to the scriptures, reciting Durga Maa’s mantras while wearing a garland made of blood-colored sandalwood is particularly beneficial and produces results quickly.

One should recite while holding a white sandalwood garland in order to receive Lord Krishna’s blessings. With this, hopes are quickly realized.

It is stated that obtaining the Sun God’s blessings is crucial for leading a prosperous and contented life. Chant their chants while wearing ruby or bel wood garlands.

It is preferable to repeat Chandra Dev’s mantras while wearing a pearl garland. This keeps the mind in a relaxed and balanced state.

Every mantra has a certain way that it must be said. Knowing when to say the mantra, how much to chant, and for how long is crucial since incorrect chanting may also be damaging. You can follow our experts’ recommendations if you don’t fully understand chanting. You may also WhatsApp us, email us, or enter your contact information in the comment section below.