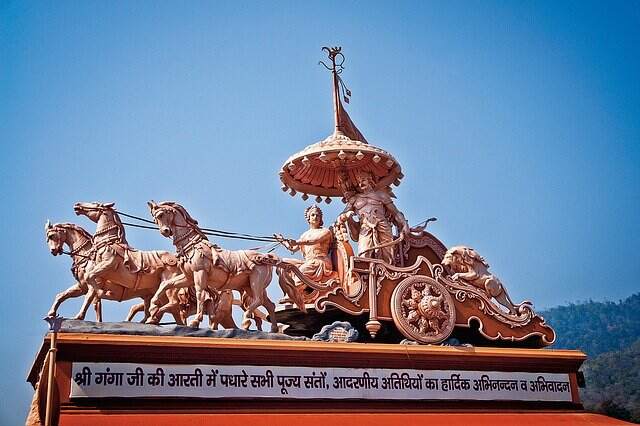 Why Did The Mahabharata Take Place At Kurukshetra?

For ten days, Arjun and Bheeshm Pitamah fought each other. After being afflicted by Arjuna’s arrows on the eleventh day, sitting on the bed of arrows, expressing his longing for water and meditating Mata Ganga, Arjuna summoned Mother Ganga ji and revealed the Ganges from the earth with arrows. Bhishma Pitamah ji greeted Ganga Mata ji and saw his mother for the first time. Following this, Ganga ji vanished, and the name of the region became known as ‘Bheeshm Kund, Baan Ganga’.

In a month, there are two Pakshas: Krishna Paksh and Shukla Paksh. In the dark, Krishna Paksha, and in the light, Shukla Paksha. Lord Krishna taught Arjuna the wisdom of the Gita on the Mahabharat Krishna Paksha Ekadashi. Arjuna and Bhishma Pitamah fought with Arjuna for ten days on this area, then sat on the bed of arrows for the eleventh day, lying down for one month and 26 days and waited for Uttarayan. On the day of Ashtami, Bhishma went to heaven after Basant Panchami.

Dronacharya fought for four days, Shalya for two days and a half, and Karna for one day and a half. The battle lasted 18 days. Dharmaraj Yudhishthira was born into disinterest after the conflict. The warrior Bhishma Pitamah then preached the action of wisdom to everyone while lying on the bed, discussing the way of religion and the texts. For those who comprehend the true secret of religion revealed on this pilgrimage, Pitamah’s final lecture is incredibly beneficial and important.

This property stretches for 48 KOS in Kurukshetra, with Bhishma Kund Baan Ganga in the centre. Digambar Deshraj Puri ji built a temple dedicated to Lord Shri Krishna ji, who preached to Arjuna before the Mahabharata (Gita Gyan) and vision of Virat form were provided.

In the middle of 48 KOS, the land of Kurukshetra is the shrine of Brahma ji. It is surrounded by four pillars, four Yakshas (Dwarpal, Dwarpal), whose names are as follows:

(4) Kapil Yaksh Dwarpal is located in the west.

It guards Lord Brahma’s shrine in the centre of the four Yakshas. The creature who commits evil activities in the Dharmakshetra grows 13 times faster and bears 13 times the fruit of the creature who practises Dharma Karma. When a person follows his dharma, he experiences happiness; yet, when a person violates his dharma, he experiences sadness. Kurukshetra was the name of the Kauravas’ battleground in the northeast. Southwest Dharmakshetra was the Padvas’ battleground; Kurukshetra was called after the Kuru monarch of Dwapar; it was previously known as Brahmasar.