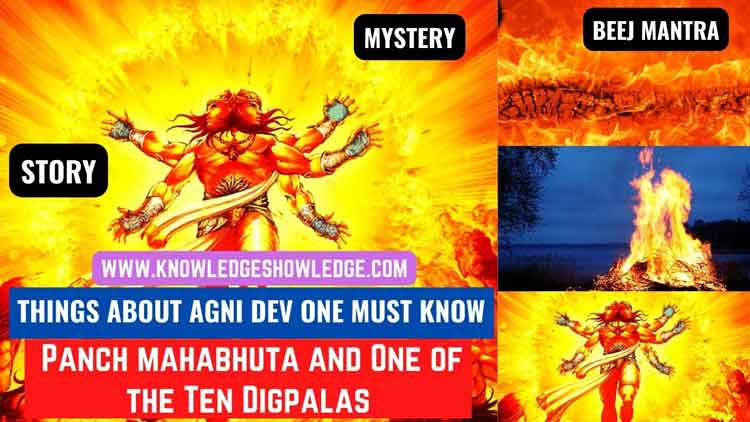 Agnidev – Panchmahabhuta and One of the Ten Dikpalas

Agni is the protector of the gods and in any battle he walks in front of the gods. In many places, he has also been called the commander of the gods.

The great importance of fire has been told in Hindu religion. Life of humans is not possible without fire and that is why we worship fire like a deity. The presiding deity of this fire has been described as Agnidev, whose origin is believed to have originated from the Supreme Father Brahma himself. One of the concepts of Panchmahabhutas in Hinduism is Agni. The other four are earth, water (Varuna), air and sky.

Ten Dikpals of Hinduism are also considered and Agnidev is one of them. He is the presiding deity of the southeast direction. In the Vedic period, Agni has been considered one of the trinity. The other two of the trinity of Vedic times were Indra and Varuna. Even in mythological times, the importance of fire remained the same and one of the 18 Mahapuranas, Agni Purana, is dedicated to him.

The first word of world literature is Agni. The reason for this is that the first Sukta of the oldest Veda Rigveda begins with the word Agni. There are more than 200 hymns related to Agni in the Rigveda alone. Apart from this, in the Aitareya Brahmin also, Agni has been called the first god again and again. He has been considered the head of Yagya. He has been called the mouth of the gods because every oblation thrown in the yagya reaches other gods only through the mouth of Agni.

A total of seven tongues of fire have been described from which they receive the future. They are – Kali, Karali, Manojwa, Sulohita, Dhumravarni, Sphulingi and Vishwaruchi.

It is believed that Agni is the protector of the gods and in any battle, he walks in front of the gods. In many places, he has also been called the commander of the gods. All types of gems are believed to have originated from fire and only Agnidev wears all the gems.

Agni’s wife is said to be Swaha who was the daughter of Prajapati Daksha. It is said that Agni Dev loves his wife so much that without her he does not accept any future. This is the reason why it is necessary to pronounce “Swaha” at the end of everything dedicated to the fire. His 4 sons have been mentioned – Pavak, Pavamana, Shuchi and Svarochish. Of these, Svarochish only took over as the second Manu. Apart from this, Neel, the commander of the monkey army in Ramayana, is also considered to be the son of Agni. The number of all his sons and grandchildren has been told as forty-nine.

In many texts, Kartikeya has also been described as the son of Agni Dev because Agni Dev had first imbibed the glory of Mahadev and then because of not being able to bear it, he had absorbed it in water. According to legend, when Goddess Parvati cursed the deities to remain childless, Agnidev was not there.

When Mahadev’s son was needed to kill Tarakasura, then everyone started looking for Agnidev who was hiding in the water. He cursed that the one who would tell the deities their place, his tongue would turn upside down. A frog, a gazelle and a parrot told the deities their place, due to which the tongues of all three were turned upside down. The deities asked Agnidev to imbibe the glory of Mahadev. He did the same and became the instrument for the birth of Kartikeya.

According to a legend, Poulomi, the wife of Maharishi Bhrigu, first married a demon named Puloman. This led to a dispute between Bhrigu and Puloman regarding his wife. Then Bhrigu asked Agni whose wife is Poulomi? On this Agni took the name of Puloman. Enraged by this, Bhrigu cursed Agni that he would devour everything. Due to this fire started being considered impure. Then Agnidev got angry and stopped accepting the future of the yagya, due to which anarchy spread.

Then Brahma himself gave a boon to Agni that he would be considered holy even after consuming everything except the gas of non-vegetarian creatures. After the boon of Brahmaji, Agni again started accepting the future. Due to the boon of Brahmaji, no matter how impure an object may be, when it goes into the fire, it becomes pure. Mother Sita also purified herself by entering the fire after her abduction. According to Ramcharitmanas, Shri Ram dedicated Mother Sita to Agnidev and got his wife back from her through Agnipariksha.

Why the First Part of Yagna to Agni?

According to the Harivansh Purana, once the Asuras defeated the deities, Agnidev got angry and decided to kill them. They started burning all the demons with great speed. Fearing this, the Asuras left heaven. The Maya demon and Shambarasura created rain from Maya, due to which the fire began to wane. Then Devguru Brihaspati blessed Agni to be always bright.

According to Brahmapurana, Agni had a brother named Jatvedas. He was the bringer and taker of the future. Once a demon named Madhu killed him. Seeing this, Agnidev left heaven in sorrow and settled in the water, due to which heaven was in great trouble. Then all the gods led by Indra came to take Agnidev back to heaven. On this, Agnidev said that he needed power to protect him from the demons. On this, Indra and all the gods promised to give him the first part of every Yajna, which pleased him and returned to heaven.

According to the Brahmapurana, when Agni could not handle the glory of Mahadev, he poured it into the water where Kartikeya was born from Kritikas. When he came back to his wife Swaha, he saw that a little bit of Mahadev’s glory was left in his mouth. He gave it to his wife Swaha, from whom a son and a daughter were born. The birth of a son was named Suvarna and that of a daughter was named Suvarna. By chance both became adulterous.

Then the gods and demons cursed him to become omnipresent. Later, with the inspiration of Brahmadev, he did the penance of Mahadev and got freedom from the curse. The place where he did penance was called Tapovan.

According to a story, when Maharishi Ved’s disciple Uttank requested him to take Guru Dakshina, he asked him for the coil of Maharaj Poushya’s wife. Then Uttank reached Maharaj and wished for the queen’s earrings, which the king gave. The queen warned them that Takshak also wanted to get this coil, so they should be careful. On the way, when Utank started bathing keeping the coils, Takshak fled to the underworld with those coils. Then Uttanka did penance to Agnidev and by his grace recovered those coils.

Agnidev is a very angry god. Along with this, his hunger is also very intense. In the Mahabharata, to satisfy the hunger of Agnidev, Arjuna and Shri Krishna asked him to eat the Khandava forest. Takshak also lived in the same forest, for whose protection Indra himself came. Then Shri Krishna and Arjuna stopped Indra, who consumed the entire forest with fire. Pleased with this, he presented Arjuna with a unique bow called “Gandiva” and a divine chariot.

The Vedic texts describe Agnidev as having a body of red colour, having three legs, seven arms, seven tongues and sharp golden teeth. Agni Dev is surrounded with ghee with two faces, black eyes and black hair. Both the faces of Agni deva indicate his benefic and destructive qualities. His seven tongues represent the seven rays of light emanating from his body. His vehicle is a sheep. Some images also show the god Agni riding a chariot which is being pulled by goats and parrots.

Even in science, fire has been considered the best discovery of the universe. The sun god himself also shines with the help of fire god and nourishes the earth. There is no movement of humans without fire. From birth till death we need fire. Fire is required at the time of birth, fire is important in learning, friendship also takes place in front of fire, in marriage only fire is taken as a witness and after death the body is found in Panchabhutas only through fire ceremony.