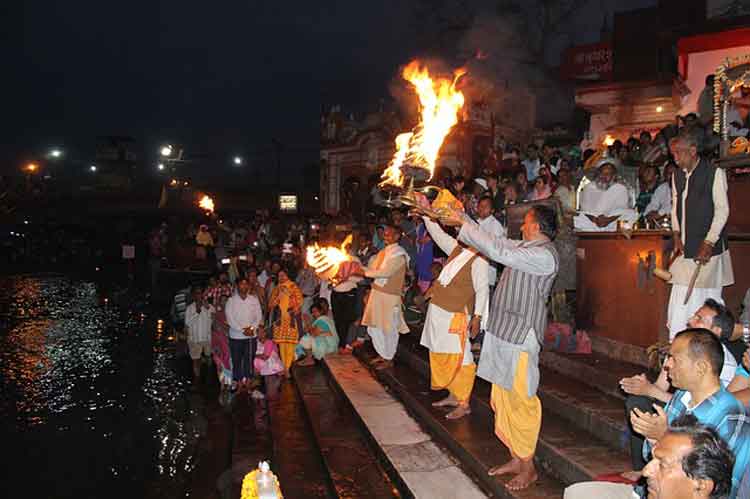 Aarti means to be immersed in the devotion of God with full devotion. Aarti is also known as Neerajan. Neerajan means to publish exclusively. That is, the positive energy received by worshiping God should illuminate our mind. Brighten up your personality. Performing aarti even in worship done without mantra brings perfection.

In relation to the aarti of God in Skanda Purana, it is said that if a person does not know the mantra, he does not even know the method of worship. But if the aarti of the Lord is being performed and by participating in that worship work with reverence, then the Lord accepts his worship completely.

How to Decorate the Aarti Plate

A lotus filled with water, flowers to be offered, kumkum, rice, lamp, incense, camphor, washed clothes, bell, aarti collection book should be kept in the aarti plate. Make the shape of a swastika with kumkum on the plate. Brass or copper should be used for the plate.

Why Is The Aarti Ritual Necessary After Prayer?

Whether it is home or temple, after the worship of God, aarti is performed with the sound of clock, bell and conch. Any worship without aarti is considered incomplete. Therefore, before starting the puja, people sit with aarti plate decorated. The Skanda Purana contains the answer of why Aarti is so vital in worship. This Purana claims that if a person does not know the mantra or the technique of worship but does aarti, God will accept his worship totally.

Aarti is both scientifically and religiously significant. Remember which items are used in the thal of the aarti. Cotton, ghee, camphor, flowers, and sandalwood must have come in your mind. Cotton is pure cotton; it is not tainted in any way. Similarly, ghee is a fundamental component of milk. Sandalwood and camphor are both pure and sattvic compounds.

When a wick of ghee and camphor is lit with cotton, a wonderful aroma spreads in the atmosphere. Due to this, the negative energy present in the surrounding environment escapes and positive energy starts circulating.

With the sound of the conch shell and the bell ringing in the aarti, the mind is focused towards any deity, which is sung by meditation, which ends the conflict going on in the mind. The soul, which has been asleep in our body, is reawakened, and the mind and body are energized as a result. And know that you are receiving God’s grace.