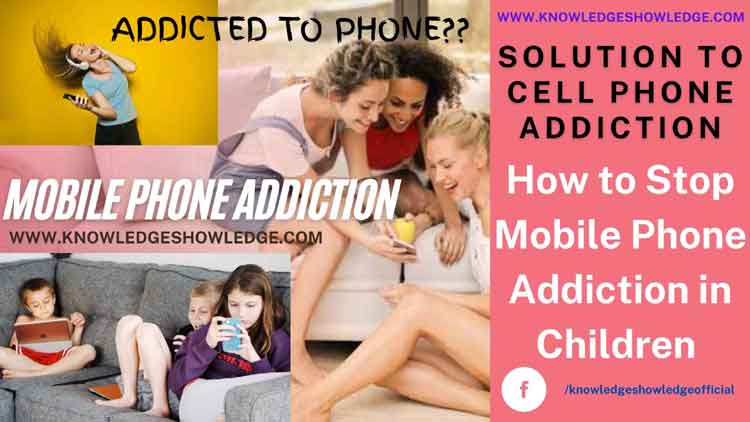 Mobile Phone Addiction and Its Solutions

Mobile Phones or Smartphones have altered the realm of communication in today’s modern day. Instant messaging, the internet, and a plethora of apps have enveloped the entire world in recent years. Mobile phone addiction is affecting the most vulnerable sector of the population: the younger generation. Today’s children are all screenagers, as they grow slowly and do not mature into teenagers. Children’s screen time increases as they grow older, which is extremely detrimental for our younger generation.

Excessive smartphone use in children can lead to physical and emotional issues. According to physicians, children’s mental health issues such as sadness, sleeplessness, and irritability are on the rise as a result of their excessive usage of mobile phones (Mobile Phone Addiction). Physical issues such as headaches, loss of appetite, loss of vision, eye pain, and neck pain are also common in children who are addicted to their phones.

Today, we will learn about the methods for overcoming mobile phone addiction in youngsters through this article.

Why Do Kids Stare At Their Mobile Phones?

According to some specialists, a 6-month-old newborn is drawn to numerous types of imagery and colours. This is one of the reasons why children’s interest in mobile phones continues to grow. All of the children are drawn to the mobile phone because of the light it emits and the visuals it displays in various ways. Children’s curiosity grows as they listen to the sounds made by mobile phones, and they want to learn more about them, comprehend them, and touch them. This is why children become enthralled by the sight and operation of mobile phones.

Also Read:100 Most Interesting facts About The World

Why Do Kids Get Mobile Phone Addiction?

1. When parents have to do some work and their children are bothering them, they place a phone in the child’s hand to distract them. If you’re doing the same thing, stop since it’ll make your child addicted to his phone and he’ll start asking for it from you.

2. Parents frequently hold the phone in their hand to quiet the sobbing youngster. This is also not a favourable situation. The child will exploit your weakness and begin crying about everything in order for you to hand over the phone.

3. If the child refuses to eat, the parents try to persuade him by holding the mobile in his hand. The child becomes accustomed to the cell phone from this point forward. The child will no longer eat food if he or she does not have access to a mobile device. Parents are required to provide their children with cell phones.

4. In addition, many parents continue to give their children mobile phones in the excitement of our child running a smartphone at such a young age, believing that it will become quicker in the future. This also leads to a child’s cellphone addiction.

The use of smartphones by children can potentially lead to a slew of issues. We’re going to show you a couple of them below:-

1. The Issue of Children’s Physiological Addiction

This issue is known as the proclivity to focus on any physical thing. In simple terms, addiction can be defined as a strong desire to do something. Children develop a strong attachment to the smartphone in their hands at an early age, and as a result, they grow addicted to it. It has gotten to the point that they don’t even care about eating, drinking, or sleeping. This is referred to as physiological addiction.

2. A Problem with Your Behaviour

Your children may have a behaviour problem if they prefer to play games on their phones instead of going outside. This difficulty is exacerbated in children who interact with their peers. As a result, encourage children to engage in physical activity.

3. Mood Shifts from One Moment to the Next

Mood swings are a prevalent problem among today’s youngsters; as a result of this problem, they feel cheerful for a brief period before becoming irritated and depressed for the next. Excessive smartphone use puts children at risk of experiencing mood swings.

4. The Problem of Nervous Disorders in Youngsters

As we all know, cell phone radiation puts children at risk for a variety of serious health problems. Nerve issues are among them. Although nerve disorders can cause a variety of major issues, they can all result in the loss of capacity to walk, speak, breathe, swallow, and learn, which is extremely risky for children’s future.

5. Having a Learning Disability

The way youngsters study has changed as a result of increased technology. Children nowadays use cell phones or calculators to do even the most difficult arithmetic problems, which is far more convenient than completing multiplication on rough paper as we did. This is the reason why children’s memory is deteriorating. With only one click, you may access all of the information available on the internet. As a result, they won’t have to recall anything. This is the primary reason why pupils have lost interest in traditional learning methods and are compelled to use calculators even for simple calculations. The advantage of reading by hand is that it sharpens your thinking. As a result, the memory capacity increases.

6. Risk of Cancer as a Result of Cell Phone Use

According to a study on the issues produced by children’s smartphone use, the radiation generated by cellphones can also cause life-threatening diseases such as cancer. As a result, the risk of developing a brain tumor rises.

7. Insomnia in Children is a Major Problem

Children use smartphones to play games and watch cartoons. They maintain seeing new things by remaining awake all night, which allows them to keep seeing new things. As a result, children’s interest in cellphones is beginning to grow. As a result, individuals have difficulty waking up early in the morning. The chance of developing a disorder like insomnia in youngsters increases if this habit is maintained.

8. Children’s Problems with Living in a Fantasy World

One of the reasons why children spend more and more time on social media sites with their virtual friends while avoiding your gaze is because of cellphones. I dislike making true friends. They are lost in this fictitious universe, and their actions have no bearing on reality. This has an effect on them, causing them to fall behind in their schoolwork and other activities. This might be extremely detrimental for the children’s future.

9. The Use of Eyeglasses in Children at a Young Age

Children spend a lot of time in front of their smartphones due to their tremendous interest in them. As a result, the light released has an effect on their eyes. As a result, they have vision issues at a young age, and the child is forced to wear glasses.

10. Do You Have a Headache Problem?

Long periods of time spent on a smartphone can induce headaches in youngsters.

If you take care of these things, your child will not become accustomed to using a mobile device.

The Advantages of Mobile Phones for Children

In many respects, children’s usage of smartphones has become unavoidable. As a result, their safety, learning, comprehension, and academics are aided. Let us look at some of the benefits of utilising a smartphone:-

1. Able To Communicate With Anyone Who Is In Need

You may simply call and talk to anyone, anywhere, at any time, and ask for assistance with the help of a smartphone. You can also alert your guardian if you are in any kind of difficulties. You have the ability to safeguard yourself.

2. The Ability to Learn and Comprehend From Home

The smartphone allows the child to access any type of material in any language he desires. He does not need to leave the house for this. You may access a wealth of information from the comfort of your own home. As a result, the child’s time will be saved as well. A smartphone and internet are required to obtain any type of information while sitting at home.

3. Its Application in Research

The student child can save his most important book on his smartphone and use it whenever he or she needs it. The child can download as many books as he wants and read them when he has free time; the book downloaded online is referred to as an eBook. Which may be read from anywhere with ease using a smartphone.

It is beneficial if good material is visible on mobile. Anjani Toyworld YouTube Channel, a children’s channel, is now receiving a lot of attention on YouTube. Only children’s material is presented on this channel, which includes a variety of challenges and games. As a result, the youngsters learn something new as well. You can expose this type of channel to the kids so that they can observe and learn new innovative things.

6. To Gather More Evidence as a Security Measure

If you want to keep your child safe, turn on the GPS in your smartphone before going anywhere with him or her. With which you can keep track of the child’s location and keep it secure. In the event of an accident, the child can use the camera on his smartphone to collect evidence of the accident and keep himself safe.

How Do I Get My Kids’ Attention Away From Their Mobile Phones?

1. While it is impossible to take away a child’s smartphone in today’s world, you should set out time for them to use it. You sit with your children over extended periods of time, telling them about new things, conversing with them, and, if possible, playing physical games with them.

2. To help your child overcome smartphone addiction, enrol him in a sports club, where he will not only develop an interest in sports but also maintain a healthy body and mind.

3. Try to talk with your children instead of using their phones.

4. If you enjoy it, encourage the kids to help with domestic duties to the best of their abilities. Instead of using cellphones, children will learn to be self-sufficient and gain practical and social knowledge in their spare time.

5. Attract youngsters to nature; this will pique their interest in nature while also providing them with an opportunity to learn about their culture.

6. If at all possible, explain to the children that using smartphones is extremely damaging to them. Encourage children to participate in activities such as dance, music, and painting that they enjoy; this will help them develop more effectively.

The Best Strategies to Keep Your Child Away From Mobile Phone

Rather of assessing your children’s flaws and strengths and making them mobile, as a parent, you should encourage them in achieving their goals from an early age. Children’s healthy growth is dependent on their parents’ work and education, as parents are their children’s first teachers. As such, they must act as a friend, guide, and leader, as well as make their children productive.

You can leave a comment below if you have any questions about this post “How to Stop Mobile Phone Addiction in Children”.