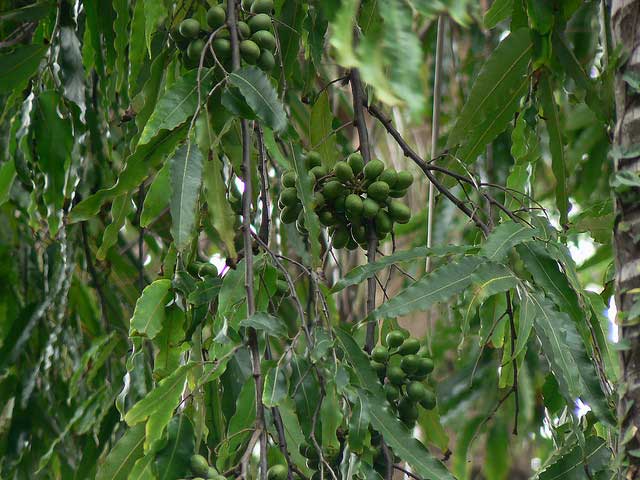 Ashoka tree is considered to be very sacred, beneficial and fulfilling various desires in Hinduism. The literal meaning of Ashoka is “no sorrow of any kind”. Wherever this holy tree is situated, there is no sorrow or disturbance of any kind. Ashoka leaves are used in Manglik and religious works. This tree has been considered to have a special effect of natural forces, due to which the place where this tree grows, all the works go on doing it completely uninterrupted. That is why the Ashoka tree is very relevant in Indian society.

Lord Shri Ram himself gave it the liking of a tree to remove mourning. There is also an Ashoka in the five wreath arrows of Cupid. It is said that the tree under which mourning does not sit, is called ‘Ashoka’, that is, the one who has the power to remove all the exploitations of women, is Ashoka.

Ashoka tree is 25 to 30 feet tall like a green tree mango, dense and shady with many branches. It looks like a maulshree tree, but it is smaller than it is in height. Its stem is brown with some redness. This tree is found all over India. Its pallavas are 9 inches long, round and pointed. They are placed in 5-6 pairs on either side of an ordinary pedicle. In the soft state, their color Shwetabhalal then becomes dark green. The leaves turn red when they dry. Fruits arrive in the spring. Some become orange first, then red respectively. They last till the rainy season.

The pods of the Ashoka tree are flattened eight to ten inches long, one to two inches wide and slightly cropped at both ends. It takes place in the month of Jyeshtha. There are four to ten numbers of seeds in each. The beans first turn purple and become black on ripening. The scab above the seed is thick, like leather, of a blood color. Bark, flowers and seeds are used for medicinal purposes.

There is a huge difference from the point of view of medicine among the castes that adorn only gardens like the real Ashoka and Sita Ashoka, the pendular draping Ashoka. It is essential that the bark is used correctly from this point of view. The bark of the real Ashoka is pure gray from outside, the roughness of touching is blood color from inside. It is bitter in taste. Ashoka with mango leaves is also used somewhere as adulteration, but it is not the real Ashoka.

Ashoka tree is also known for its special qualities. Some of its properties are as follows:

If you have any questions related to Benefits and Importance of Ashoka Tree and Uses of Ashoka Tree (Ashok ka Ped) then write in the comments section or you can also email us. I wish you and your family a happy and prosperous life.