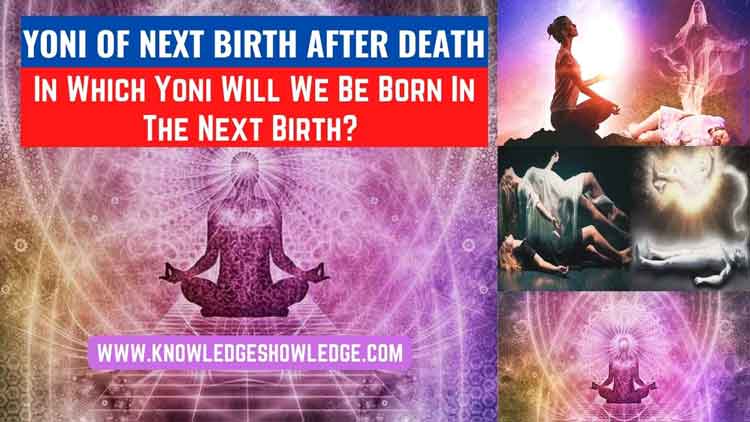 In Which Yoni (Species) Will We Be Born In The Next Birth?

Parascience… In which Yoni (Species) we will be born in the next life…..

Man is born alone and dies alone, according to our scriptures. Human riches and splendor have all been left behind. Friends and family members are left at the crematorium. The body is consumed by fire. Only crimes and virtues are carried by that soul. He is the only one who appreciates vice and virtue, yet religion follows him. There is a significant contrast between the body and the gunas (virtue actions), because the body only lasts a few days, however the qualities last till the end of time. He is genuinely living if his values and dharma are alive.

The human body that lives on Earth can only experience happiness and grief to a limited level. The fruits of virtues or crimes that cannot be enjoyed by any human body on earth are experienced in paradise or hell. When the sins or virtues are sufficiently strong that they may be enjoyed on earth, the soul takes birth in a body on earth.

In the realm of death, a person obtains the immovable-movable, i.e. tree, gulm (bush), creeper, vine, mountain, and grass-like Yoni (Species) in order to enjoy the vestiges of karma. All of them are the Yoni (Species) of enjoying sufferings. For a long time in the Yoni (Species), one must endure the agony of being sliced and burned in the fire.

If a living being gets an insect Yoni (Species), he is subjected to the agony imposed by entities stronger than himself, such as going through excreta and urine while suffering from cold-air and hunger, among other things. Similarly, when an animal reaches the Yoni (Species), it continues to feel pain from a stronger animal than itself. When entering the Yoni (Species) of a bird, one must occasionally experience the inconvenience of drinking air and sometimes consuming filthy foods. If a creature joins the Yoni (Species) of an animal carrying a load, the creature will be tied with a rope, beaten with clubs, and ploughed.

The Fourteen Witnesses to Man’s Actions or Deeds or Karma

The sun, fire, sky, air, senses, moon, evening, night, day, directions, water, earth, time, and religion are all witnesses to human acts. The sun does not stay in the night, the moon does not stay in the day, and the blazing fire does not continue forever; but one of the night, day, and evening is always present. Directions, sky, air, ground, and water are constantly there; man cannot flee or hide from them.

Man’s senses, time, and religion are all with him at all times. Any action will be performed at some moment (Kaal) by one or more of the sense organs. The planets and constellations of man, as well as the five main elements, bear the brunt of that karma. When a person does a bad conduct, Dharmadev tells the person, and the person must be punished.

The activities outlined in the Vedas are called dharma (virtue), whereas the opposing behaviours are called adharma (sin). In a day or an instant, a man might commit such a virtue or vice that his delight may not be full even after a thousand years.

Man takes birth and dies in many forms of sins in this world-cycle, much like a clock’s pendulum.

1. The one who harms the parents must go inside the turtle’s Yoni, as stated in our scriptures (Species).

2. A person who insults a buddy becomes the Yoni (Species) of a donkey.

3. Anyone who earns a living via deception enters the monkey’s Yoni (Species).

4. A person who steals someone’s heritage and keeps it with him becomes a Yoni (Species) of worm.

5. A guy obtains the Yoni (Species) of a fish by betraying him.

6. Those who cause hurdles in auspicious works like as marriage, yagya, and so on, get worms.

7. After not feeding the ancestors and Brahmins, the god eats himself and travels to Kakayoni (crow).

These are some modest instances.

By traversing several yonis in this manner, the living thing eventually gets a human yoni thanks to a tremendous virtue. If one is born poor, ill, deaf, or disabled, even after acquiring the human Yoni (Species), he must endure great humiliation and misery. Because Lord Vishnu is the provider of the fruit of action and the source of deliverance from the bondage of the world, one should worship him in order to be free from the bonds of the world after experiencing a rare human birth. Man can effortlessly traverse the global ocean and reach the home of the highest being by performing devotion to all the incarnations of Lord Vishnu.

What Happens To the Devotees?

The domain of their worship is where devotees go. Salokya-mukti means being anything in the realm of God. Sashti-mukti means to obtain wealth comparable to that of God. Being there after achieving Godhood is sarupya-mukti. Samipya-mukti is the state of remaining as God’s ornaments. Saujya-mukti is the union with the Deity of the Lord. The will of the Lord allows the living creature who has gained the Lord’s home to give birth to a divine child together or separately in the earth. After completing God’s task in the earth, he returns to God’s home, free from the bonds of karma.

The Way to Cross the World-Ocean

Lord Vishnu explained how to traverse the universe’s ocean to Lord Rudra and advised him to praise him frequently by singing the hymn “Vishnusahastranama.” Because even for yogis, the uncommon salvation remains in the hands of those devotees, those who have ahobhagya, ahobhagya, are those who are engaged in the devotion of Lord Vishnu….The Narad Purana

Humans require labour to survive. There will be both sin and virtue if you practice karma. However, if a person works for the Lord, to fulfil His commands, and for the Lord’s joy while maintaining God’s vision in everyone, then that person’s acts also become akarma and do not enslave him to the laws of karma. Even when he is physically present in the world, he is unbound. Men who practice philosophy are liberated from the motion of the world. Their lives are consumed with God rather than moving forward. Liberation is attained by yogis who follow the clear path of Uttarayan, sati ladies, combat-dead warriors, and yogis.

The Gita refers to two movements as Shukla and Krishna Marga. The deities of smoke, darkness, Krishna Paksha, and Dakshinayana take those in whom passion is still present and carry them away. They are reborn on earth after enjoying their qualities in the above world. The gods of Agni, Din, Shukla Paksha, and Uttarayan carry away those in whom there is no longer any lust. When they give birth on earth, they never leave.

Also Watch: Mantra Jaap for All Purpose | Mantra Chanting As Per Karma

It’s a world of waiting, sort of. The individuals who give birth to a creature on earth, such as his parents, siblings, and wife, as well as the people who bring him joy and misery, are all either in heaven or hell as a result of their various acts. This creature must wait until each of them is qualified to give birth to a Yoni (Species) that is advantageous to it. Pitruloka is thus a sort of waiting planet.

Pretlok’s rule states that a person gains speed in accordance with his or her most recent desire or emotion. A person wanders around bound by the attraction of that attachment and aversion after leaving the body after becoming attracted to any significant attachment, aversion, greed, or attachment. After discovering a pneumatic body, that deceased man is given an extremely unpleasant Yoni (Species). Due of this, it is believed that –