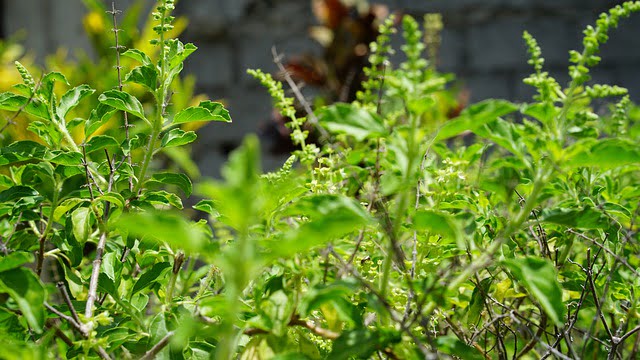 There is a plant of Holy Mother Tulsi in every deity temple in India. According to Hindu culture, there must be a tree of mother Tulsa, Amla and Pomegranate in every house of a Hindu family, in which all the three trees are there. Tirthas reside in that house. Yamraj’s messengers do not enter that house. Tulsi Dal is put in the Charanamrit that is prepared in every temple. By taking it, all diseases are destroyed and there is no premature death of living beings, not only this, but that creature is also not reborn.

The place around Tulsi is holy, because it keeps the air clean. If there is pain in the ear, taking out its juice and putting it in the ear ends the pain. Fever Malaria mosquitoes run away from its aroma. According to the Padma Puran, Lord Shankar Mahadev talks to his son Shri Kartikeya that by eating the fruits of Amla, wearing Rudraksha, and consuming Tulsidal (leaf), he is going to give salvation.

Lord Shiva Shankar tells that if Lord Vishnu is worshiped with Tulsa leaves, then the fruits of the Koti Yagya are obtained. The householder should plant a Tulsa plant in the house. In Kaliyuga, all sins are destroyed by worshiping, chanting and meditating on Tulsi. The person who preaches the worship of Tulsa to others and also conducts himself. He goes to the supreme abode of Lord Shri Lakshmipati.

The one who has kept a garden of Tulsi ji in the house has completed the rituals of hundred yagyas. The person who wears the Tulsi Dal mounted on Shaligram rocks on his head becomes free from all sins. and attains heaven. One who has served Tulsi ji has taken bath in all the pilgrimages. The person who dies by wearing a Tulsa leaf in the crest. He attains heaven by getting rid of all sins.

One should wake up every morning and bathe (irrigated) with pure water, worship with incense, lamp, Akshat etc. Tulsa leaves should be plucked only in the morning and not in the evening. Breaking Tulsa leaves on Thursday, Sankranti, Dwadashi and Amavas is prohibited.

Every year on Kartik Shukla Ekadashi, Tulsi is married in temples across the country. The marriage of Shri Vishnu Bhagwan and Tulsa Mata is done with great rituals. The procession of Lord Vishnu from temples is brought from one temple to another. According to Hindu culture, altar, mandap, havan-kund etc. are made and marriage of Shaligram and Tulsa plant is done by seven rounds. After taking off the aarti, the girl worship is done. Brahm Bhoj is done on the procession. The way we send off a girl. Similarly, Tulsa ji is sent off with Shaligram rock.

History of Basil or Story of Vrinda Jalandhara

According to the legend, the Jalandhar demon attained invincible power by doing severe penance. After that he started persecuting the gods. Vrinda, the wife of that demon, was a very pious woman. The demon Jalandhara defeated the gods Indra in the battle. All the deities took Brahma ji with them and went to the shelter of Lord Vishnu and started praying with folded hands.

Sri Lord Vishnu heard his prayer. God thought of the remedy for the death of that monster and learned that because of the religion of the wife, I myself cannot defeat that monster in battle. Therefore, Lord Vishnu ordered the gods to fight again with that demon and himself, taking the form of Jalandhar demon, went to his palace and destroyed Vrinda’s virtuous religion. The demon was killed in battle.

When Vrinda came to know the deceit of Lord Vishnu, she cursed Lord Vishnu to become a stone, then Lord Vishnu became Shaligram rock. Shri Bhagwan cursed Vrinda that you too should become a tree. Vrinda itself became the form of Tulsi tree. In the name of the same Vrinda, there is a beautiful place called Vrindavan on the banks of Yamuna ji, where Lord Shri Krishna, the Leela avatar of Vishnu, performed many pastimes.

Therefore, in the worship of Lord Shri Krishna, Vishnu ji and Shaligram, the leaf of Basil (TulsiPatra) must be approved. By the grace of Lord Vishnu, if any women worships Tulsi Mata then she never becomes a widow and her husband becomes Chiranjeevi.