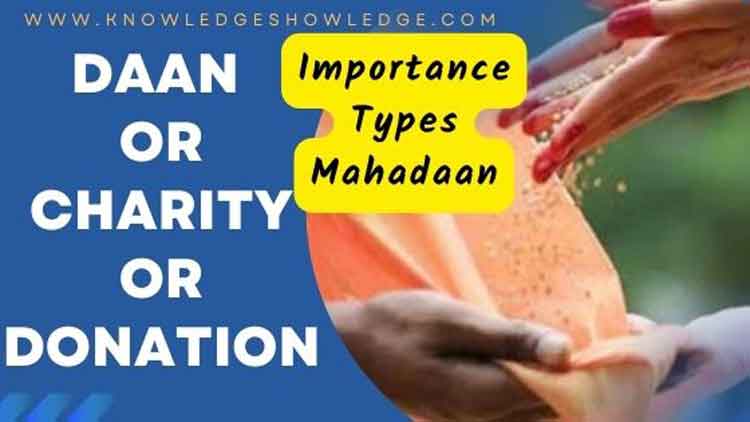 What is the Glory of Daan or Charity?

At the time of giving charity, there are tears of joy, there is a thrill of giving, sweet words, a sense of respect and the receiver is worthy of taking, then only then is the glory of charity.

If daan is given with contempt, to a wicked person, with pride, the credit for the donation is destroyed.

Whether the time is favorable or unfavourable, charity must be done according to one’s ability, because the giver is also God and the loser is also God.

If you donate with one hand, it returns with a thousand hands.

Donation is not only a financial help. Whatever country, time, circumstances, according to the circumstances, can offer selflessly in their capacity that is charity.

Keep giving something from your heart, your brain will continue to receive sesame seeds.

Importance of Charity or Daan or Donation

The literal meaning of charity is ‘the act of giving’. Giving charity to a deserving person is considered a supreme duty. The greatness of charity has been told.

In modern context, the meaning of charity is to give something in the form of help to the needy, but giving to the needy is considered a duty from the point of view of scripture.

With the desire of a particular fruit, ending one’s right on one thing and establishing the authority of another is daan. At the same time, it is necessary that there should not be any kind of exchange in exchange for the donated item.

The fulfilment of this donation is said only when the right of the beneficiary is established over the things donated. It should be assumed that an object was given in charity, but if that thing is destroyed before the beneficiary has the right over that item, then it cannot be said to be a donation. In such a situation, although the donor does not feel the reward, yet the donor cannot get the fruits of the donation.

The three types of charity are said to be Satvik, Rajas and Tamas, with these distinctions. The charity which is given in a holy place and at the best time to such a person who has not done any kind of favor to the donor is a sattvik Daan. The charity which is given in return for any kind of favor done on oneself or out of desire for some fruit or out of compulsion is called Rajas Daan. The daan which is given to a disobedient and unworthy person without any hospitality in an impure place and inappropriate time is called Tamas donation.

From these distinctions, physical, verbal and mental, three different types of charity have been counted. The donation of gold, silver etc. which is given with determination is a physical donation. Barley Abhay charity is given when a fearful person comes near him, it is a verbal donation. The offering of japa and meditation to Prabhriti is called mental donation.

Types of Daan or Charity or Donations

There are manyDaan or Charity or donations in which:-

The person to whom the donation is given is called the person of charity. An ascetic, who knows the Vedas and Shastras and conducts himself according to the path prescribed in the scriptures, is the best deserving of daan. Here Brahman occupies the first place. After this, eligibility is considered in the ratio of knowledge, qualities and age.

Apart from this, Jamata, Dauhitra and Bhagineya are also good deserving of charity. The donation given to a Brahmin is said to be threefold, to a Kshatriya triple, to a Vaishya double and to a Shudra is said to give normal results. The above eligibility has been calculated for special donations.

Describing the importance of charity, it has been said that

By not giving charity, there is poverty. One goes to hell due to the effect of sinful deeds and after coming from hell, becoming poor again and again a sinner, who is engaged in the cycle of birth and death, never finds happiness.

Must Know About Daan or Charity or Donation

(1) Mother gives birth to her child.

(2) The teacher donates knowledge to his disciple.

(3) Guru gives protection to the seeker under him.

(4) A father donates his daughter’s daughter.

(5) The yajman, with the help of the priest, donates the yajna.

(6) The householder donates cow for his family.

(7) A humanitarian donates his organ keeping in mind the need of another.

(8) The wealthy donates money partially, for the purpose of protecting and increasing his wealth.

(9) Doctors used to give life to their patients.

[Charity given, results in its own time]

(3) The effect of charity ends on discussion.

This karma is is known as Daan in Sanatan Dharma, Zakat in Islam and Charity in Christians.

According to the Chhandogya Upanishad, there are three components of religion, renunciation, acquisition of knowledge and charity.

Donation: The practice of charity in our Vedic (Sanatan) religion is going on since Vedic times, there is a mention of donation in Rig Veda also.

Daan or Donations or Charity as per Rig Veda

There are three types of donations in Rig Veda,

Auspicious time, place of pilgrimage and donation given to Vedagya without any desire and desire, is called satvik, considering the change in time period, present auspicious time, place of pilgrimage, or Vedagya at one’s own residence or any needy deserving person Donations given to a person without any desire and aspiration are also called satvik.

For some reason, to avoid one’s dilemmas, the donation made in the desire to get something, or for the sake of name, or for showing the world, whether it is given to anyone, comes in the category of Rajasik charity.

Read This for Better Understanding

According to the Taittiriya Upanishad, one should give charity while being revered and swell from the depths of the mind.

In this way, donations can be made to every Vastu, but we can say all of them like this:

Donation of Vastu Used In Daily Use.

Donation of Things That Are Useful In Household Life

Also Watch: Mahadaan of Kaliyuga | Maha Daan | What is the Best Charity in Kaliyuga

There is a feeling of sacrifice in charity. You do not have any right over the donated thing, while your right on the entrusted thing remains, in the same way, at the time of marriage, in the witness of the holy fire, the girl donates the girl by taking the promise of taking full care of the girl from the bridegroom. But there is no right of one’s own, maternal family, but the feeling of belongingness, attachment to motherhood remains.

4 Donation of Vastu Used In Daily Use

It is very easy and simple to give these donations according to one’s own ability, in this the person receiving the donation and his family can get timely saturation.

8 Food donation: In this donation only the recipient gets satisfaction from the hunger of that time.

9 Abhay / Forgiveness: The donor can live peacefully without any fear, hesitation and guilt in this charity. But this charity is the most difficult to give, there is no financial loss in giving this charity, everyone is capable of giving, but no one gives this donation.

10 Donation of Life: not everyone has the right to give this donation, this donation can be given by God, the controller of the whole world, or only the king, ruler or president of the nation can give it.

The donating parents hand over a piece of their liver to an unknown person, taking care of all the responsibility of the house of the person receiving this donation, preserves the dignity and dignity of both the houses, there is no practice of daughter donation in other religions. It is the custom of accepting one’s own i.e. girl child and handing over the girl herself, or her guardian or parents, according to their mutual views, whose culmination is not appropriate to mention here.

12 Vidya Daan / Gyan Daan: In my view, the most important donation is Vidya Daan or knowledge donation, the one who accepts this donation can sustain the whole family, and protect the self-esteem of the family along with himself, only Vidya And through knowledge Dharma, Artha, Kama and Moksha can be attained.

Hope you must have linked the information on Daan or Charity. Please share your point of view in comments section.