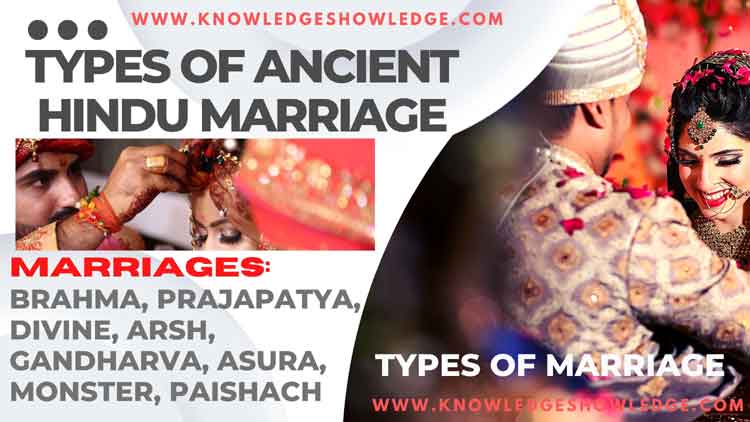 In Hinduism, marriage is considered to be a bond of seven births in which two souls meet. Marriage has been described as the fifteenth of the sixteen sacraments in which a person enters the life of a householder from his life of celibacy. Along with this, marriages in Manusmriti have been divided into eight parts according to their types. It has been a tradition to get married on the basis of these. Today we will tell you in detail about the different types of marriage.

In this, first of all the family members of the groom go to the bride’s house with a relationship and propose marriage. When consent is obtained from the bride’s family, the relationship is considered confirmed. After this, the marriage is done with full rituals and with Vedic mantras, in which the bride’s father is married. After Kanyadaan, that woman is now considered to be of the groom’s side and now she has to fulfill the duties of her life by staying there.

In Prajapatya marriage, the bride’s parents do not take her consent for the marriage and get her married at a young age. In this, instead of handing over his daughter to the groom, the father of the girl hands over his daughter to her father. That’s why after marriage she goes to her in-laws house.

Since they are still young, the bride is kept in the house as a daughter and they are allowed to live together when household life begins. This is a form of Brahma Vivah, only in this marriage is done first.

This is also a form of Brahmo marriage in a way, but there was no religious ritual etc. in it. This was done when a person was unable to get his daughter married and did not have enough money or the girl could not be married within a certain age limit or could not find a suitable groom for her. Ho.

In that situation, he used to get his daughter married to a perfect man or a knowledgeable person, that is, he used to donate his daughter in religious rituals etc. This has been given the noun of divine marriage. Although it has been said in the religious scriptures not to do divine marriage as far as possible, but according to the situation, it was considered appropriate to do it.

This was generally a marriage in which the people of the groom’s side gave cows and bulls to the bride’s side in return for her marriage. There was no exchange of any kind of money in this. That’s why it was also called Godan marriage. It was also done mainly for the purpose of helping tribal or poor families. Through this marriage, the bridegroom used to donate a cow as a fee.

According to today’s time, it can also be called love marriage. This was a marriage in which a man and a woman liked each other but their families did not agree to it. That’s why this marriage was done without his permission, then it has been given the noun of Gandharva marriage. In this they used to get married without any major religious rituals. If seen in history, Maharaj Dushyant’s marriage with Shakuntala comes in the category of Gandharva marriage.

Also Watch: Remedies to Get Likeminded Bride or Groom

This marriage was not kept in the category of proper marriage. This usually happened more with girls from poor families in which a price was paid for marrying a girl. In this, by giving more money to the people of the bride’s side, the groom’s side used to make a deal of the girl and the marriage was completed.

This usually happened when the man either had some defect, belonged to a low caste or was not suitable for the girl, such as being older than her or any other reason. This marriage is not considered good in the scriptures.

When a man and a woman like each other and the family members of the groom’s side agree with it but the bride’s side disagrees, then seeing the girl’s choice, marrying her came under the category of Rakshasa marriage.

Lord Krishna also had a demon marriage in which Rukmani liked him but his family members were not ready for it. Then Shri Krishna had abducted Rukmani and married her. Apart from this, in other famous examples, the marriage of Lord Krishna’s sister Subhadra with Arjuna and Maharaj Prithviraj Chauhan’s marriage with Sayongita was also a demonic marriage.