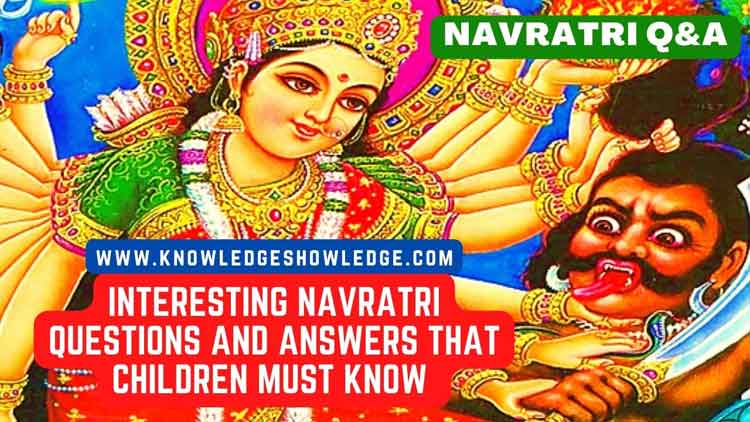 We all welcome the mother in our house with great rituals and do every possible work which can make the mother happy. Nava means ‘nine’ and Ratri means ‘night’, as this festival is celebrated for full nine nights hence it is called Navratri. If we ask you from where you learned these customs, then of course you will answer that, as you saw your elders following all the customs, you also adopted them in the same way. All of us, when we are young, learn these traditions from our parents and elders and follow them.

But, with the changing times, it is no longer necessary that the traditions that you have been following, your child will also follow the same traditions without question. In today’s time children find the logic behind everything, they are curious to know what is the reason behind the customs we are following. Children have curiosity and curiosity to know everything related to the festival and they will be able to understand the true importance of all the festivals only when they know what is the reason behind performing all these rituals and rituals.

Our country is a vast country in terms of festivals, one of which includes the festival of Navratri, it is celebrated in different states according to different cultures. Therefore, it is very important for us to understand the importance of these festivals and celebrations to make the children know about the civilization of the country.

Since Goddess Durga is worshiped as a symbol of divine feminine, energy and power, it is essential for parents to tell children about Maa Durga and also why Navratri is celebrated on such a grand scale. is celebrated on

During this Shardiya Navratri, you must tell your children about these 6 things related to Navratri which are as follows:

Why Do We Celebrate Navratri?

According to mythology, there was a powerful demon named Mahishasura, whose terror caused all the gods to be very upset, due to which the gods invoked Goddess Adishakti to end the terror of Mahishasura. During this call, Goddess Durga appeared. Maa Durga fought with Mahishasura for a full 9 days and finally killed her on the 10th day i.e. Dashami of Shukla Paksha of Ashwin month. Remembering this festival of victory, Durga Puja is celebrated. Information related to Navratri and Dussehra for children.

What Happens In The Fast? What to Eat?

Let the kids enjoy the festival to the fullest by including them while you prepare the food items for the fast. You can teach your child to make simple dishes like sabudana khichdi or kheer and makhana ki kheer. Don’t forget to involve your child in whatever preparations you make for Navratri. When they join hands with you in your work, then you will be able to know the importance of the festival even more closely.

What Is Kanya Puja Or Kumari Puja?

In Hinduism, girls have been given the status of goddess, so they are respected. It is written in religious texts that in a house where women are respected, God himself resides there. On the day of Ashtami and Navami, girls are welcomed as the form of nine goddesses. If you organize Kanya Pujan at your home, invite them to come to your home in advance.

On the day of Kanya Puja, girls are worshiped by washing their feet, putting Akshat, flowers and kumkum on their foreheads and making them sit on the seat. After this, food is offered to the mother along with the offerings offered to her. Then by giving gifts to all the girls, the worshipers take their blessings.

Why Discipline Is Important?

This is a great way to make children understand the importance of discipline, you can tell them how to start the day with discipline. Start your day by taking a bath in the morning, then after reciting the worship, do the rest of your day with pure thoughts. This way you will be able to teach your child how to follow these rituals by being disciplined. All this teaches them how to control their senses and how to keep their body from being affected by any bad thing.

You must tell all these things to your children, so that in the coming times, they can understand the importance of the festival and follow it.

Along with telling the importance of the festival to the children, some things should also be taken care of themselves and the children should also be told. The festival of Navratri is a festival to worship and worship the nine forms of Maa Durga. Every devotee tries to express his devotion towards the mother accordingly. But many times we do not have knowledge of many things and knowingly we unknowingly make that mistake which we should not do at all.

When we celebrate a festival, it should be followed with complete rituals, only then it has some significance. Due to our carelessness, we make some such mistakes due to which all our worship lessons become in vain. If this Navratri you want to please Maa Durga completely, then do not do the things mentioned below at all.

What Mistakes Not To Do During Navratri?

The things that you should not do during Navratri are as follows:

Do Not Insult the Kalash and the Akhand Jyoti

In this festival, people do a lot to please the goddess. Installing Kalash at home is one of them. If you have also installed a Kalash in your house, then keep in mind that never leave your house empty during this period. Also, if you have lit an Akhand Jyot, keep it indoors, do not light it outside.

Do Not Eat Non Veg during Navratri

Do Not Get Beard-Mustache and Hair Cut during Navratri

During Navratri, hair should not be cut or beard-mustache should be made. It is said that Goddess Durga gets angry by doing this. If you are forced to shave because of work, then you can shave once or twice, but do not cut the hair on your head. Apart from this, if you are thinking of organizing your child’s shaving ceremony during Navratri, then do not do so at all.

Avoid Sleeping During the Day during Navratri

You cannot completely give up sleep for these nine days, but you should sleep as little as possible. Avoid sleeping especially during the day. This is especially true for fasting people, as it is said that if you sleep during the day during Navratri, all the good deeds you earn during the fast will be in vain. Therefore, try that you spend your time in worship as much as possible throughout the day.

Do Not Consume Onion, Garlic

You should not use onion ginger garlic during the nine days of Navratri and should consume sattvik diet as much as possible during this time.

Do Not Consume Tobacco and Alcohol

Do not consume any other intoxicants like tobacco and alcohol during Navratri.

Physical relations should not be made during Navratri, as it does not give you the fruits of your good deeds.

It is not considered good to cut nails during Navratri. Therefore, before the start of Navratri, you should do all these things, which are forbidden to do during Navratri.

Also Watch: Why We Celebrate Navratri for 9 Days | Untold Story of Goddess Durga

You should not wear black clothes during Navratri, because black clothes are not considered auspicious and during the festival one should not do any such work which is inauspicious. According to religious beliefs, Goddess Durga gets angry with black color, so avoid wearing black clothes for nine days of Navratri. In these days, you can wear saffron, yellow, red, pink, green and sky colors etc. in the worship of mother.

Do Not Consume Grains and Salt

When you fast during Navratri, take special care that you do not consume grains and salt during these nine days. Instead, you can eat buckwheat flour, half a cup of rice / mordhan, water chestnut, sago, rock salt, fruits, potatoes, nuts, groundnut etc.

We hope that the information provided by this article will help you and your children to fully understand and fulfil the importance of the festival.