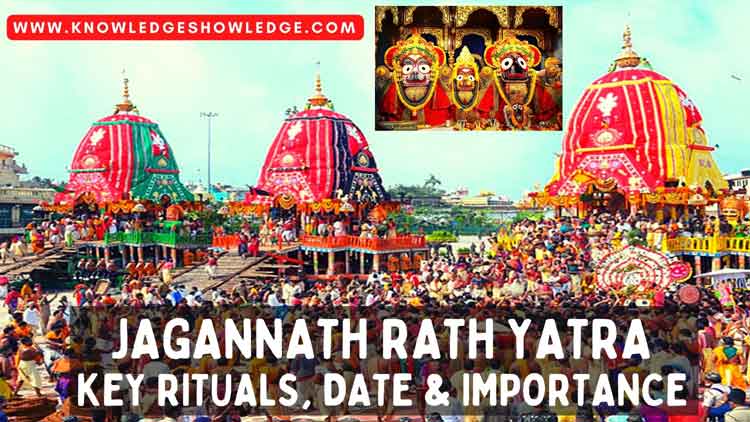 Lord Shri Jagannath Rath Yatra is an annual chariot festival of Lord Sri Jagannath Mahaprabhu held in Odisha. It is considered as the biggest car festival in the world. It is also held in other Jagannath temples around the world.

On the Rath Yatra, Lord Jagannath, his elder brother Baldau and his beloved younger sister Subhadra come to their aunt’s place every year with much fanfare and festivities, seated on three majestic chariots, which starts from the Jagannath temple in Puri.

When Does The Jagannath Rath Yatra Begin In Jagannath Puri?

The day of Rath Yatra is fixed on the basis of Hindu lunar calendar and it is fixed on second day during Shukla Paksha of Ashad month every year.

Chandan Yatra is the longest festival celebrated in Jagannath Temple of Puri. Chandan Yatra lasts for 42 days. It is prohibited in two parts, one is Bahar Sandalwood and the other is Bhitara Sandalwood. The third day of Shukla Paksha of Vaishakh has a special significance in the cultural tradition of Orissa. This day is known as Akshaya Tritiya.

Narendra Tirtha Bahar sandalwood is adorned with the names of deities starting from Akshaya Tritiya and lasting for 21 days. The construction of chariots for the annual Rath Yatra festival begins on Akshaya Tritiya. On the first 21 days, the five Shivlingas known as the Panch Pandavas along with the representative idols of the main deities of the Jagannath Temple are taken in a procession from the Sinhdwar or Lion Door of the Jagannath Temple in Puri to the Narendra Tirtha Tank. .

The final 21 days include the rituals that take place inside the temple. Instead of a daily circumambulation, there are fickle rides on four occasions, which are on Amavasya, Purnima ki night, Shashti ko, and Shukla Paksha ki Ekadashi Tithi.

Snan Yatra or Deva-Snana Purnima Purnima is a bathing festival celebrated on the Purnima of the Hindu month of Jyeshtha on the occasion of the Jagannath Rath Yatra. It is also known as Snan Purnima. This is Lord Jagannath’s birthday.

According to the Hindu calendar, this is the first occasion in the year when Jagannath, Balabhadra, Subhadra, Sudarshan and Madanmohan are brought out of the Jagannath temple and taken in procession to the bathing altar. There they are formally bathed.

After the holy Snan Purnima, it is believed that Lord Jagannath gets sick with cold and fever for a period of 15 days. During this period they are given home medicine and they relax in their resting place every time.

Shree Gundi’s Yatra – On this day the famous Rath Yatra started. Lord Jagannath along with his brothers and sisters is taken to his aunt’s house for the holiday with the greatest fanfare.

This is celebrated in the Gundicha temple on the fifth day from the start of the Rath Yatra.

Hera Panchami is a ritual of Goddess Lakshmi. ‘Hera’ means ‘Dekhna’ and ‘Panchami’ means fifth day. This Rath Yatra is celebrated in the Gundicha temple on the fifth day from the date of commencement of the festival. On the night of the 5th day, the representative idol of Goddess Mahalakshmi is taken to the Gundicha temple in a colorful procession through the Grand Road in a lavishly decorated palanquin.

After learning that Goddess Mahalakshmi was coming to meet him in anger, Lord Jagannath asked his servants to quickly close the door of Gundi’s temple. After secretly seeing her Lord, she returns to the temple in anger and disgust, damaging a part of Jagannath’s chariot. Which is watched by the crowd with great enthusiasm.

Sandhya Darshan program is usually done one day before the Yatra. It is believed that seeing him during this event is equivalent to seeing Lord Jagannath in Sri Mandir for 10 consecutive years.

The Return Of The Deities From Their Ancestral Home To The Puri Jagannath Temple Is Known As Bahuda Yatra. It Is 9 Days After Gundi’s Journey.

After their return, the chariots are placed in front of the Puri-Jagannath Temple Puri, while preparations are made for the royal appearance of the deities. “Suna Besa” is the form that Lord Jagannath takes along with his brothers and sisters.

In total, there are 32 Bash (forms) which are Lord Jagannath, Balabhadra and Subhadra. Suna Besa is one of the most seen by the devotees as it is performed in great chariots. This is done on Ashad Shukla Ekadashi date. It is also known as Bada Tadhou Besha. In it, the deities are decorated with beautifully carved gold ornaments.

This ritual is celebrated on Ashad Shukla Dwadashi, in which a special drink is offered to the deities on their chariots. The drink is called Adhara pana. It is a special type of sweet drink in which paneer, milk, sugar, spices etc. are mixed.

The Maha Yatra of Lord Jagannath, Baldau and Subhadra in their chariots begins with an elaborate royal ritual called Pahandi, known as Pahari Bije. Pahandi procession happens in a row.

Both the brothers, Balabhadra and Jagannath are decorated with large elaborate floral decorations called tahiya. These are made of various types of white, orange, and lotus flowers, leaves, which are attached to a semi-circular heart-shaped bamboo frame.

The two brothers, adorned with tahiyas, are carried forward in a slow, undulating motion, whose gait appears to be that of an intoxicated giant elephant. Hundreds and thousands of devotees eagerly wait for a glimpse of the deities.

As the deity exits the lion door, the main entrance of the temple, there is a huge crowd of devotees at the lion door, chanting the Lord’s name with great enthusiasm, cheering enthusiastically. Takes place. Lord Balabhadra comes behind him.

Then Subhadra, Jagannath and Balabhadra ji’s younger sister of yellow-golden complexion, are quickly carried to their chariot with great speed. At the end, Lord Jagannath, the beloved deity of the devotees, comes in a royal procession. As the procession moves forward, dancers perform the traditional Orissa dance mardala and mridanga, accompanied by traditional Orissa percussion instruments.

Devotees also perform sankirtan, which is a ritual group chanting the names of God with rhythmic jumping movements.

Among all the rituals of Jagannath Rath Yatra of Puri, Niladri Bije is the most interesting.

Before entering the temple, ‘Rasgola’ will be offered to the Trimurti on the chariots. With Niladri Bije, the annual Rath Yatra of the deities will end and the deities will give darshan to the devotees in the main temple.

The second phase of the festival is an equally colorful and elaborate ritual known as Chhera Pahnara. The king of Puri, Gajapati Divya Singh Dev, is informed that the deities have taken their place on the chariots. The young, handsome king, clad in immaculate white robes, comes in procession with silver palanquins.

They get on all the chariots one by one. Then, they first worship the deity seated on the chariot and then clean the platforms with golden brooms, sprinkling of flowers, and perfumed water on the surface of the chariot.