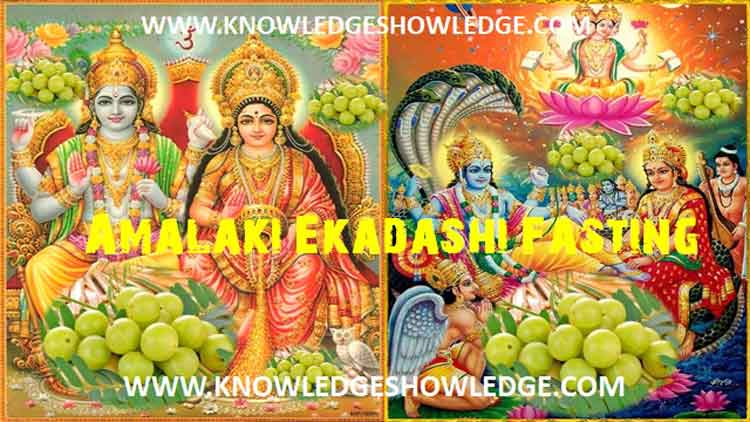 As mentioned in the Padma Purana, observing the fast of Amalaki Ekadashi with rules and devotion gives the same virtue as visiting hundreds of pilgrimages. By fasting and worshiping on this day, along with Lord Vishnu, Mata Lakshmi’s grace is also obtained. The person gets happiness and prosperity. Amla is considered to be of great importance on this day. Amla should be offered to Lord Vishnu. Those who do not keep fast should also consume amla.

• On the first day of Amalaki Ekadashi Vrat i.e. Dashami Tithi, the fasting should sleep with Ekadashi fasting while meditating on Lord Vishnu.

• Wake up early in the morning on Ekadashi and after taking bath, take a vow of fasting while meditating on Lord Vishnu.

• After this, in front of the idol of Lord Vishnu, taking sesame, kush, mudra and water in his hand, one should resolve the fast.

• During the resolution, the fasting person should say that I keep the fast of Amalaki Ekadashi with the desire of Lord Vishnu’s happiness and salvation. For the successful completion of this fast of mine, Shri Hari keep me in his shelter.

• After this, after taking a resolution from the below mentioned mantra, worship God with Shodshopchar.

• Now after worshiping Lord Vishnu, the gooseberry tree should be worshiped with the worship material.

• First of all clean the land around the gooseberry tree. Now make an altar at the root of the tree and install the Kalash on it.

• Invite the deities, pilgrimages and ocean to this Kalash. Keep scent & PanchRatna in the Kalash. Place Panch-Pallav on it and then keep the lamp ignited.

• If there is a gooseberry tree nearby, then go there and worship with incense, lamp, sandalwood, roli, flowers, Akshat etc.

• If there is no Amla tree, then offer Amla to Lord Vishnu.

• On the day of Amalaki Ekadashi, remember the Lord by reciting Bhagwat Katha and Bhajan-Kirtan at night.

• Worship Lord Vishnu after getting up in the morning on the next day of Dwadashi Tithi i.e. Ekadashi Tithi. After this, after eating food to a needy person or a Brahmin, donate Kalash, clothes and gooseberry etc. and send them away by giving them Dakshina.

• Break the fast by taking food on your own in Parana Muhurta.

Addressing eighty-eight thousand sages, Sutji said – “O Wipro! It is a matter of ancient times. The great king Mandhata asked Vashisthaji – ‘O Vashisthaji! If you are pleased with me, please tell the law of such a fast, so that May I be well.

Maharishi Vashishtha said – ‘O king! Amalaki Ekadashi fasting is the best of all fasts and the one who gives salvation in the end.

King Mandhata said – ‘O sage! How did this Amalaki Ekadashi fast originated? What is the by-law of perceiving this fast? O Knower of Vedas! Please tell me all these details in detail.’

Maharishi Vashistha said – O king! I tell you the details of this fast before you – this fast is observed in the Shukla Paksha of Falgun month. All the sins of the fruits of this fast are completely destroyed. The merit of this fast is equal to the fruit of one thousand cows. Apart from its qualities, the importance of Amalaki (Gooseberry) is also in the fact that it originated from the Shrimukh of Lord Vishnu. Now let me tell you a legend. Listen carefully-

In ancient times there was a city called Vaidik. In that city, Brahmins, Vaishyas, Kshatriyas, Shudras, people of all four castes lived happily. The sound of Vedas always resonated in the city.

There was no sinner, misogynist, atheist etc. in that city.

A Chandravanshi king named Chaitrarath ruled in that city. He was a scholar of high order and a person of religious nature, no one was poor nor miser in his kingdom. All the people of that kingdom were Vishnu-bhakts. All the residents, small and big, used to fast on every Ekadashi.

Once Ekadashi named Amalaki came in the Shukla Paksha of Falgun month. On that day the king and every person, from old age to child, observed fast on that Ekadashi with joy. The king came to the temple with his subjects and started worshiping Dhatri with incense, lamp, naivedya, Pancharatna, Chhatra etc. They all started praising the dhatri in this way – ‘O dhatri! You are the form of Brahma. You are born by Brahmaji and are the destroyer of all sins, salutations to you. You accept my prayer. You are honored by Shri Ramchandraji, I pray to you, take away all my sins.’

Everyone did Jagran in that temple at night. During the night a fowler came to that place. He was a great sinner and a wicked man.

He used to follow his family by doing violence. He was very much disturbed by hunger and thirst, with the desire to get leprosy food, he sat in a corner of the temple.

Sitting at that place, he started listening to the story of Lord Vishnu and the greatness of Ekadashi. In this way, the fowler spent the whole night with other people awake. In the morning everyone went to their respective residences. Similarly, the fowler also went to his house and went there and had food.

After some time, the fowler died.

She had done violence to the soul, due to which she was a part of the horrific hell, but on that day she was born in the house of King Viduratha due to the fasting and awakening of Amalaki Ekadashi. He was named Vasurath. When he grew up, he started operating ten thousand villages with Chaturangini army and being full of money and grains.

He was like the sun in brilliance, like the moon in radiance, like Lord Vishnu in valor and like the earth in forgiveness. He was extremely religious, truthful, karmaveer and a devotee of Vishnu. He treated the people equally. Giving charity was his daily karma.

Once King Vasuratha went to play hunting. By luck, he lost his way in the forest and due to lack of knowledge of the direction, he slept under a tree in the same forest. After the leprosy time, the hill bandits came there and, seeing the king alone, shouted ‘kill-kill’, the king ran towards Vasuratha. Those dacoits started saying that this evil king has killed all the relatives like our parents, sons and grandsons and expelled them from the country. Now we must avenge our insult by killing it.

At the same time a divine goddess appeared from the body of the king. The goddess was very beautiful and was adorned with beautiful clothes and ornaments. His brow was crooked. Ferocious blazes of rage were coming out of his eyes.

At that time she seemed like a time. He destroyed all those bandits in an instant.

On waking up from sleep, the king saw many bandits dead there. He started thinking who killed them? Who is my friend in this forest?

King Vasurath was thinking such a thing that only then there was a voice from Akash – ‘O king! Who can protect you in this world other than Lord Vishnu!’

Hearing this voice, the king remembered Lord Vishnu and bowed to him, then returned to his city and started ruling happily.

Maharishi Vashistha said- ‘O king! All this was the effect of fasting on Amalaki Ekadashi, a person who observes even one Amalaki Ekadashi, he becomes successful in every task and finally attains Vaikunth Dham’.

Also Watch: Everything One Must Know About Ekadashi Fasting