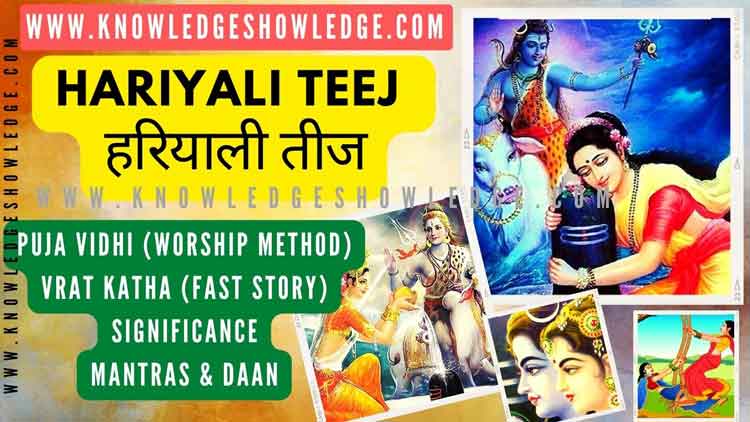 Fasting and worshipping Hariyali Teej results in the desired life partner and a long life. Must read for Hariyali Teej distinctive traditions, its fast and full style of worship, fast tale, and all other facts.

Hariyali Teej is seen on the Tritiya Tithi of the Shukla Paksha of the Shravan month. Shravani Teej is another name for it. In the month of Sawan, there is a lot of greenery. Everyone loves nature’s beauty with a joyful heart. The month of Sawan is ideal for Lord Shiva worship.

When is Hariyali Teej this year?

Hariyali Teej is observed on the third day of Shukla Paksha in the Hindu calendar month of Shravan (Sawan). Shravani Teej is another name for it.

A newly married woman is summoned to her maternal home by her in-laws’ residence after her marriage in the first Sawan. This celebration is very meaningful for newlyweds.

It is known as the Pradosh Era. These are the words of ladies who fast for Hariyali Teej.

Lord Shiva, according to Hindu folklore, was telling Mata Parvati about himself and their marriage one day. “O Parvati!” he exclaimed. You tried 107 times to have me as your husband, but you were unsuccessful.

Then, for the 108th time, you were born as a daughter of the mountain king Himalaya, and you endured severe penance in the Himalayan heights to get me as your bride. In that harsh penance, you had given up food and drink. You were simply eating dry leaves at the time.

You were continually performing painful penances, oblivious to the agony. After seeing your predicament, Parvatraj Himalaya became very angry and heartbroken. But you continued to worship me in a cave, unconcerned about everyone.

After then, you told your father, Parvatraj Himalaya, about your request and boon, saying, “I’ve been practising terrible penance for many years to have Lord Shiva as my husband, and now Lord Shiva is delighted with my penance, and he accepted me as wife.” You get me legally wedded to him.

The mountain king Himalaya then granted your dream and wedded you to me. Lord Shiva told Mother Parvati, “O Parvati! Our marriage became possible as a consequence of your fasting and worshipping Shivling on the third day of Shukta Paksha in Shravan month.

Lord Shiva told Mother Parvati that the significance of this fast is that any lady who completes it would be blessed.

Faith will be carried out with commitment, and I will see that the necessary outcomes are obtained. With my approval, the lady who follows this fast will have a stable marriage.

Charity or Daan on Hariyali Teej

Donation is also important on the day of Hariyali Teej. On this day, these items should be donated.