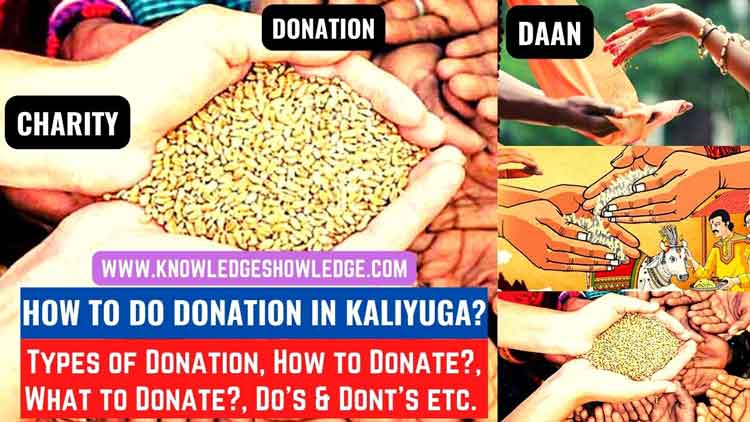 How to Donate In Kaliyuga?

Many such questions arise in the mind, by taking the solution of them, she wants to send her thoughts to you. Perhaps these ideas will help keep your charity instincts pure and refined. We all want to donate. He also knows the benefits of donation or daan. But when we see directly, then that much effect of charity is not visible. When we do not get to see any special effect of charity on our life, then our mind gets tired of charity. And a narrow mind-set is born. What happens that even after donating everything, we are not able to remain satisfied and happy?

Whereas the bountiful reward of charity is the happiness of the mind and the satisfaction of the soul. So let us consider those points that how to do charity so that the mind is pleased, the soul is satisfied and the path will be paved in Paratok and this world. In our religious scriptures, it has been told about charity that in Satya Yuga, austerity, in Treta Yuga, this is the only donation in Dwapara Yuga and in Kali Yuga, only charity is the means of welfare of human beings.

Also Read: Importance of Charity or Donation or Daan

What Are The Types Of Donation?

According to this, a person should continue to donate daily, which has been told the method of performing Panch Mahayagya daily to get rid of five types of debts for the householder.

When we make donations to a suitable vessel in auspicious times like Amavasya Purnima or on various occasions such as Sankranti period or solar eclipse, lunar eclipse etc., for the mitigation of sins committed unknowingly, then it is called Naimittik donation.

This charity is said to be the best of all donations, in this charity, for the attainment of God, the donation made to a deserving person without any selfish motive is called Vimal donation. This donation is very auspicious and auspicious.

That is, there is a lot of importance of faith in charity, when we donate to a true vessel, then it should be donated with full faith. Such a donation is received by God and God is pleased with it.

According to our strength and ability, the money which is left after taking care of our dependents and relatives, should be donated to charity. But if we donate that money to others even after our relatives are in trouble, then that donation has no reward and becomes in vain.

Three Reasons for the Destruction of Charity

That is, after donating whatever we repent that it was our favorite thing, we had to give it to another for some reason. In this way, by repentance, that charity becomes the cause of your destruction and such charity is demonic, which does not yield any fruit.

That is, the donation made to any person who is ineligible comes in the category of vampire charity. Such a person who is a mischievous person who is poor in knowledge, even though he is a Brahmin by caste, he is negligent, he destroys himself and also destroys the donor. So never donate to the ineligible.

, That is, the donation which is done without any reverence is called demon charity. Therefore, it is very important to take care of special things while donating.

How to Donate? | How to Do Charity?

Such donations, which do not have to spend some money, have a unique importance in themselves and we also get their immediate reward.

In Kaliyuga, all the people are troubled, unhappy and a child in themselves. Then in such a situation, if the suffering of a person can be reduced by your sweet words. So this charity is called the donation of sweet words, through which we provide mental happiness and contentment to the suffering person.

Where every moment a person feels himself alone and is unhappy, there is love for others, sharing their sorrows is called love donation.

Suicide is generally considered if a person is in distress, feeling disappointed, and becoming concerned due to unfavourable circumstances. As an inspiration to that person by assuring him of his help in any adversity or inspiring him with positive teeth, then this donation is called assurance donation.

If any help or any arrangement is made by us for the livelihood of any person and for family maintenance, then that charity comes under the category of livelihood donation.

The tree plantation that is being done now-a-days is also called shadow donation, if we cooperate with us and plant big trees like Pipat, Bad etc.

In Shramdaan, according to our physical capacity, we provide happiness to others through our hard work. Serving the elderly or serving the neighbors or we do someone’s work for any person by physical labor, then it is called shramdaan.

If time is given by us in any service work, then that time is called charity.

If a person has committed a crime against us and is forgiven by us, then it is called forgiveness. This donation can only be done by a person of very tolerant and good character, hence it is called among the best donations.

If we donate our body parts while in a living state, then this donation is called organ donation. Such as eye donation, kidney donation, blood donation etc., these are called very best donations.

Which must be done in one’s own lifetime.

Generally, this work which comes under the category of etiquette also enhances our personality. At the same time, the soul of the person whom we respect becomes happy. Whose reward is also received by us in the form of immediate respect, so giving respect is also the best charity.

As evidenced by the word itself, virtuous donation means whatever good deeds have been done by us in life. The merit of them has been accumulated in our account. If we pray to God to give that virtue to any of our person or any needy person for the time of his life and donate our virtues, then that charity is called Punya Daan. Like often mothers observe some fast for their children. If someone makes some resolution, then it comes under the category of flower donation.

Chanting charity also comes in the category of charity donation, when we donate the chanting done by us for the betterment of others, then that charity is called chanting donation.

Bhakti donation is such a charity in which we inspire others for devotion to God. And through our inspiration, another person adopts the path of devotion. That which one receives easily is called devotional charity.

Blessings when we salute the saints and elders, we salute. So the blessing which is given by them is called Ashish Daan. We can also bestow blessings by blessing our little ones.

All the things on this earth are possessed by the deities. Therefore, when we donate those things, while donating, remembering those authority deities. By donating, our charity becomes successful. And the deities who possess the object of charity are also pleased.

Finally (How to Donate In Kaliyuga)

Food donation and water donation are very important and beneficial in Kaliyuga. Because in this there is no need to take care of any kind of deserving country, time situation etc. Any person, whether impure or holy, may be any kind of person, but if he is hungry and thirsty, then by donating atra and jat to him, the donor will get the same result as by donating to a knowledgeable person. . That is why in our religious scriptures, special importance of food donation and water donation has been told in Kali Yuga.